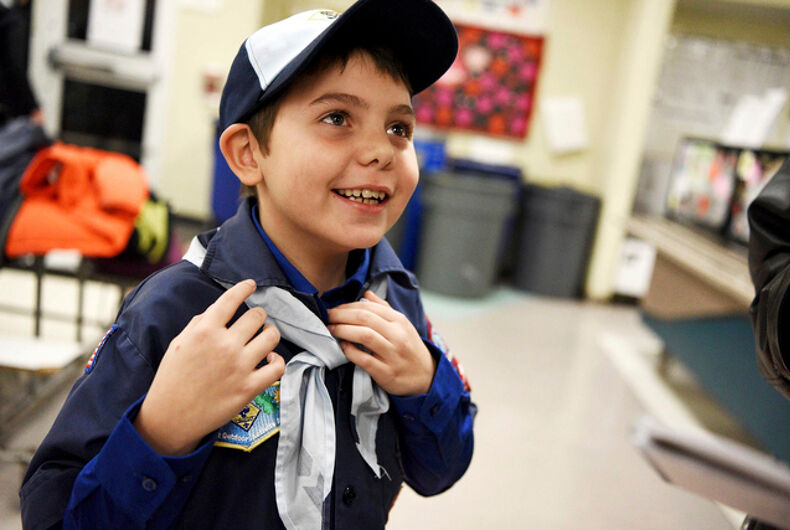 OAKLAND, N.J. (AP) — A New Jersey branch of the Boy Scouts has agreed to pay $18,000 and issue a formal apology to a 9-year-old transgender boy who was barred from joining.

The Northern New Jersey Council of the Boy Scouts made the agreement Thursday after Joe Maldonado’s mother, Kristie, filed a complaint with the state Division on Civil Rights, The Record reported.

The council also agreed to change its policies in accordance with state laws prohibiting discrimination. The Division on Civil Rights has required the council to distribute the rules to local councils in the state, according to the agreement.

Rebecca Fields, a Scout Executive with the council who signed the agreement, didn’t immediately respond to a request for comment.

Last year, Joe was refused membership to a Cub Scout pack in Secaucus because he was born a girl. The Boy Scouts of America in January announced it had reversed its ban on transgender boys after Joe’s story gained national attention.

He has been accepted by a Maplewood Cub Scout pack. His mother told The Record last month she decided to take her son to Maplewood because she did not want to go back to Secaucus, where she said scouting officials told her some parents had complained last year.

Kristie Maldonado told the newspaper Joe has been doing “phenomenal” as a member of the Maplewood pack.

Effie Delimarkos, a spokeswoman for the Boy Scouts of America, said the organization is “happy to welcome Joe and the Maldonado family back into the Scouting community.”