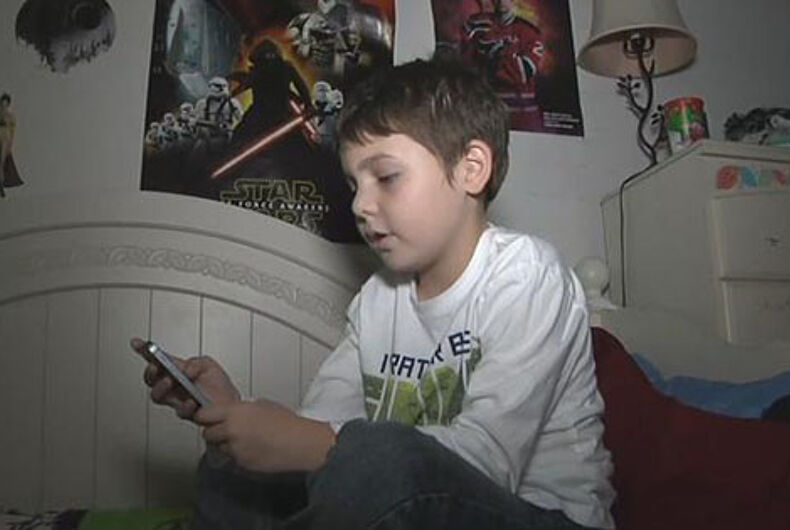 Editor’s note: this story has been updated to correct the source of the original report.

One month after 8-year-old Joe Maldonado of Secaucus, N.J. joined Cub Scout Pack 87, his mother received a call that the troop sponsored by their local Catholic church had barred her son from participating. The reason, she told reporters, is because her son was assigned the gender of female at birth. Joe is a transgender boy.

And he told the The Record he’s not so much sad as he is mad.

“It made me mad. I had a sad face, but I wasn’t crying. I’m way more angry than sad. My identity is a boy. If I was them, I would let every person in the world go in. It’s right to do.”

He had joined in October with the intention of camping, conducting science experiments, and all the other fun things Cub Scouts do, like learning how to tie a variety of knots, use a pocket knife, and go on hikes with his friends. Joe’s classmates not only like him, his mother said, but some of them play with him on a boys basketball team. His school teachers have used male pronouns and have accepted him as the boy he is since second grade, Kristie Maldonado told the newspaper.

“Not one of the kids said, ‘You don’t belong here,’” said Maldonado. It wasn’t the boys in their pack; reportedly, it was their moms.

Eric Chamberlin, an executive with the Northern New Jersey Council of Boy Scouts, based in Oakland, N.J., confirmed to the paper that he called Maldonado last month, but he declined to comment further.

Maldonado said he asked whether she would “testify” that her son was a boy. But how would he or anyone know her son was not a boy, she asked. She said he told her that he heard about it when “some mothers called.”

When the newspaper took its questions to the Boy Scouts of America, which runs the Cub Scouts programs and in the last two years has engineered a transformation in accepting both gay scouts and gay troop leaders, the answers revealed the scouts are well aware of the difference between sexual orientation and gender identity.

Effie Delimarkos, the communications director for the Boy Scouts of America, told the Record in a statement the Boy Scouts consider membership for transgender children to be a separate issue from that of gay children.

The Boy Scouts spokeswoman declined to directly address the Secaucus troop issue and did not answer inquiries about whether local or state Scouting leaders contacted the national office about Joe Maldonado.

But in her statement, Delimarkos made it clear that “the classification on the participant’s birth certificate” would be used to “confirm legal status.”

Chamberlin did not ask to examine Joe’s birth certificate, the boy’s mother told the paper. If the Boy Scouts have ever examined birth certificates for the gender markers, Delimarkos wouldn’t say. And she declined to say whether the Scouts have a written transgender policy.

This may turn out to be a landmark case, according to Justin Wilson, the executive director of Scouts for Equality. That’s the group that pushed the BSA to reverse its bans against gays. He said he’s not heard of any other packs requiring a copy of a birth certificate as as condition of membership, calling the Secaucus decision “a new, unfair arbitrary standard.”

In fact, he said there are at least two transgender Cub Scouts about the same age as Joe, one in a southern state that Wilson did not name and the other in New York.

“It’s pretty clear the Boy Scouts as a national organization have a decision to make,” Wilson told the paper. “Are they going to exclude a transgender boy for the first time or welcome transgender boys?”

Although Pack 87 is hosted by the Immaculate Conception Church, a spokesperson for the Archdiocese of Newark told the Record church leaders had nothing to do with the decision to bar Joe from the scouts, and the pastor of the church declined to comment except to say he had only just learned of the decision after it was made.

Watch a report by the Record’s Abbott Koloff and photographer Danielle Parhizkaran, below.

Look at who’s leading our Person of the Year poll