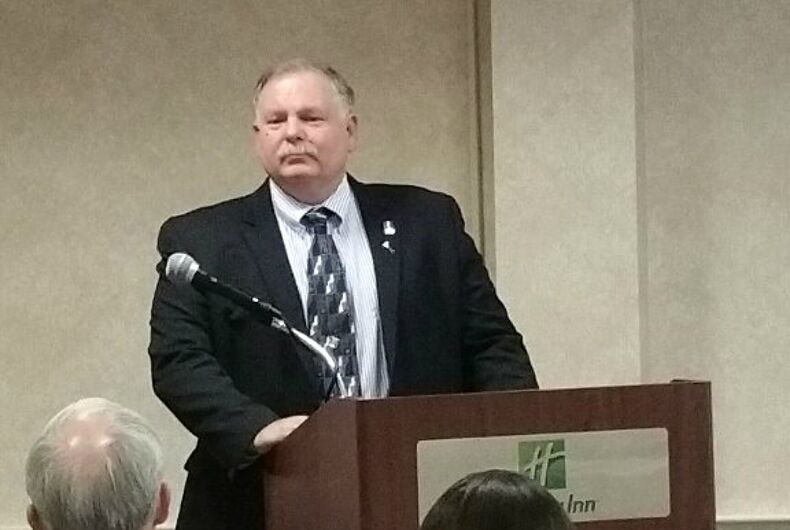 N.H. House Speaker Shawn Jasper, pictured at a speaking event in 2015, pushed to table a transgender rights bill.Photo: Via Facebook

CONCORD, N.H. (AP) — House Republicans delayed a debate and vote Thursday on legislation that would add protections for transgender people against discrimination.

Speaker Shawn Jasper had pushed to table the bill, citing concerns that men would exploit the legislation to enter women’s restrooms. Tabling a bill means it receives no debate or up or down vote. Democratic Rep. Ed Butler, its prime sponsor, urged his colleagues not to sidestep debate on the issue. A second effort by Democrats later in the day to debate the bill also failed.

“Our job is not to skirt challenging issues but to engage them,” Butler told his colleagues.

The bill would’ve barred discrimination based on gender identity in housing, employment and public accommodations at places such as restaurants or movie theaters. Eighteen other states, including every other New England state, have similar protections in law. New Hampshire provides protections already based on race, religion, sexual orientation and several other factors.

“There’s a lot of fear and misunderstanding, and that’s unfortunately what seems to lead the way instead of just listening and debating,” said Jennifer Huckman, the mother of a transgender teenager.

Republican leadership argued that the bill was flawed and could have unintended consequences. The bathroom argument caught fire among conservative lawmakers, mirroring arguments made during similar debates nationally and in states such as Texas and North Carolina. New Hampshire’s Republican governor, Chris Sununu, said Wednesday he had no position on the bill.

“This bill is poorly written and raises too many concerns,” said House Speaker Pro Tempore Sherm Packard, a Republican.

Jasper had argued the legislation would make it hard for men to protect their wives and daughters if they saw other men entering women’s bathrooms under the guise of being transgender. Such situations do not appear to be happening in states that have similar protections.

Cornerstone Action, a conservative advocacy group that is against the bill, praised the tabling decision and warned lawmakers against trying to revive the bill.

“This morning’s vote to table (the bill) is a temporary reprieve for the many New Hampshire voters who have spoken up with their concerns about the bill during the past week,” board member Shannon McGinley said.

It would take a two-thirds majority vote to bring the bill up for a debate.