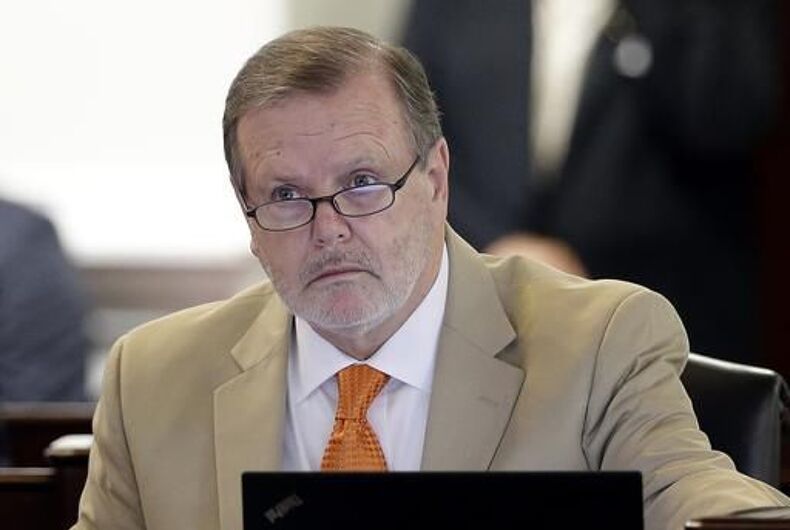 If you can’t win on substance, change a headline or two to make your side look better.

That seems to be the strategy for North Carolina Senate leader Phil Berger and his team, caught violating Facebook’s terms of service by changing the headlines of articles shared to his page to make the Republicans look better and the new Democratic governor look worse surrounding the fight over anti-LGBTQ law House Bill 2.

As Raleigh newspaper The News & Observer reports, those who recently visited Berger’s Facebook page may have seen the headline: “Has Roy Cooper flip-flopped on HB 2? Gov. Cooper now refusing to support men in women’s bathrooms.”

The real headline for story reads as follows: “In HB2 repeal effort, Gov. Cooper is silent on proposed nondiscrimination law.”

The News & Observer and Facebook are both less than pleased.

Facebook confirmed that the actions violate their terms of use, which state that users “will not use Facebook to do anything unlawful, misleading, malicious, or discriminatory.”

“We reject the assertion that posting an original hyperlink to unaltered content is somehow ‘misleading’ – Facebook allows this basic discretion to all other pages and we question why they are targeting Sen. Berger,” she said.

The paper, for its part, had already asked Berger to stop changing their headlines, a call that went unheeded.

“I am glad for you to post News & Observer articles on your Facebook page,” executive editor John Drescher wrote in a Feb. 15 letter. “However, I ask that you not change the headline or photo we placed on the story, as you have several times recently. Most readers of your page will think the headline written by your staff was the original N&O headline and will be misled.”

Berger’s chief of staff, Jim Blaine, sent a response this week suggesting that they could help write the paper’s headlines going forward.

“Rest assured that people in our office have suggested many, many, many responses to your correspondence,” Blaine wrote.

“Please let us know if you’d be willing to work together with us to provide your readers and our readers with the accurate and honest headlines they deserve,” he continued, apparently unaware that that’s not how any of this works.

“I was surprised that Sen. Berger intentionally misrepresented our news articles by writing fake headlines on them,” Drescher said. “And I’m disappointed that even after Facebook has said Sen. Berger is violating its policy, he continues to defend the practice.”

Berger’s staff didn’t limit itself to manipulating headlines from the Raleigh paper, either. Some other examples of their editing work follows, as reported by The News & Observer:

Berger version: Cooper flip flops on refugees (The Facebook post also switched an image of Sen. Thom Tillis from the Observer story to a photo of Cooper laughing.)

Betsy DeVos met with transgender students & their parents, but was she moved?