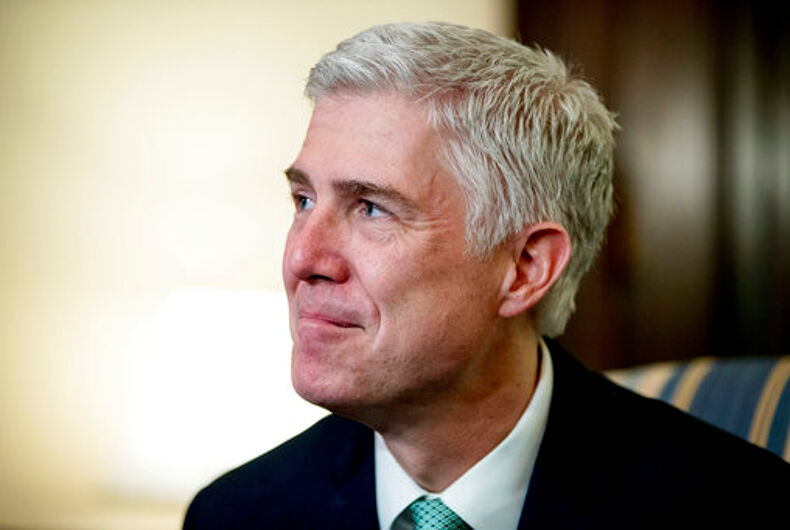 Grassley said the committee will first schedule a vote for next Monday, March 27. But he expects the vote to be held over a week, as committee rules allow any member to push it back.

Republicans have said they would like Gorsuch to be confirmed before Congress leaves for a two-week recess on April 7.

For Supreme Court nominations, the Judiciary panel has traditionally voted to recommend a nominee favorably or unfavorably, giving the full Senate the final say.

Gorsuch’s nomination has been cheered by Republicans and praised by some left-leaning legal scholars. Democrats headed into the committee hearings divided over how hard to fight him.

The first day of the hearings will feature opening statements from senators and Gorsuch himself. Questioning will begin on Tuesday.

In prepared remarks ahead of Monday’s confirmation hearing, Senate Judiciary Committee Chairman Chuck Grassley says Supreme Court nominee Neil Gorsuch is the right person to maintain the “preservation of our constitutional order” and the separation of powers under the Constitution.

Grassley says Gorsuch’s “body of professional work is defined by an unfailing commitment to these principles.”

Republicans have criticized former President Barack Obama for overreach in using executive orders to get around Congress. Grassley says “separation of powers is just as critical today as it was during the last administration.”

At the same time, Grassley tries to head off expected Democratic arguments that Gorsuch often ruled in favor of corporate plaintiffs. He says that’s “an old claim” from “an even older playbook.”

Thirteen months after Antonin Scalia’s death created a vacancy on the Supreme Court, hearings get underway on President Donald Trump’s nominee to replace him.

Judge Neil Gorsuch, 49, is a respected, highly credentialed and conservative member of the Denver-based 10th U.S. Circuit Court of Appeals. His nomination has been cheered by Republicans and praised by some left-leaning legal scholars, and Democrats head into the Senate Judiciary Committee hearings on Monday divided over how hard to fight him.

The nomination has been surprisingly low-key thus far in a Capitol distracted by Trump-driven controversies over wiretapping and Russian spying as well as attempts to pass a divisive health care bill. That will change this week as the hearings give Democratic senators a chance to press Gorsuch on issues like judicial independence, given Trump’s attacks on the judiciary, as well as what they view as Gorsuch’s own history of siding with corporations in his 10 years on the bench.

The first day of the hearings Monday will feature opening statements from senators and Gorsuch himself. Questioning will begin on Tuesday, and votes in committee and on the Senate floor are expected early next month.