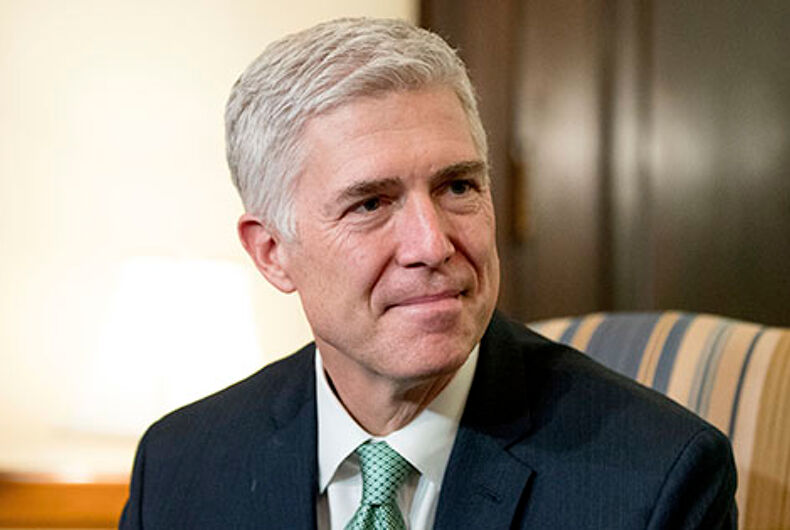 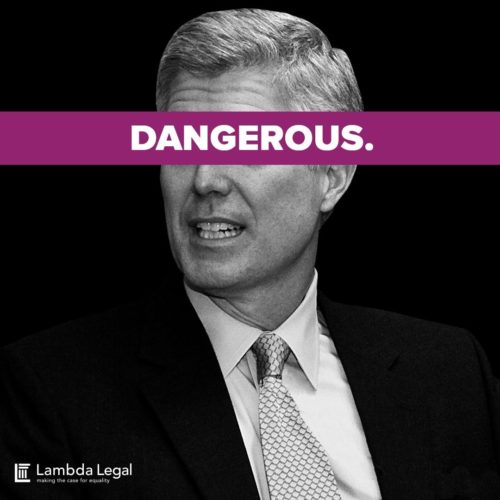 The federal judge’s track record, according to the letter from Lambda Legal and cosigned by the Transgender Law Center, Transgender Legal Defense & Education Fund, and the Human Rights Campaign, as well as 15 other groups, leads the coalition to suspect he opposes same-sex marriage and transgender rights.

As BuzzFeed first reported, the groups are concerned how Gorsuch will rule in upcoming cases, such as whether the rights of transgender students and workers are protected under existing law, and if corporations will have a license to discriminate because of their faith-based opposition to same-sex marriage.

After a comprehensive review of Judge Gorsuch’s record, we have concluded that his views on civil rights issues are fundamentally at odds with the notion that LGBT people are entitled to equality, liberty, justice, and dignity under the law.
Judge Gorsuch poses a significant threat to the LGBT community. In fact, his views are even more extreme and outside the mainstream than Justice Scalia’s, whom Judge Gorsuch is proposed to replace. His views should be as frightening to others as they are to the LGBT community.

Although Gorsuch has never decided a same-sex marriage case, the groups note that as a member of the 10th Circuit Court of Appeals, he has made it clear he identifies as an originalist — someone who holds that interpretations of the Constitution should be fixed, based on the framers’ original intent.

“This philosophy essentially writes LGBT people out of the Constitution,” the groups wrote to chairman Sen. Chuck Grassley of Iowa and ranking member Sen. Dianne Feinstein of California.

The coalition’s letter supposes that Gorsuch’s view would have negatively impacted prior court decisions on same-sex relationships and marriage. “Based on his extensive record, there can be no doubt that, had he been on the Court, Judge Gorsuch would have rejected each of these basic rights.”

The recommendation, aside from rejecting him as a nominee, is to “interrogate” the judge, especially in view of his ruling in the Hobby Lobby case: that any individual should be able to opt out of any law that, in that person’s view, makes them “complicit” in conduct of another considered to be immoral, regardless of how compelling the state’s interest in enforcing the law.

The case in question was the Affordable Care Act’s mandate that employers pay for employees’ birth control. As the letter noted, the Supreme Court ruled more narrowly, allowing corporations that are run by a small number of people — where the owners are indistinguishable from the company they run — can opt out of Obamacare mandates based on their religious objections.

The coalition zeroed in on this concept of “religious complicity,” which it says goes “well beyond anything that currently exists in American jurisprudence. For example:”

Another important case of concern was when Judge Gorsuch joined an opinion rejecting a transgender woman’s discrimination claim. “In that case,” the groups’ letter stated, “the school denied her access to the women’s restroom, and claimed that it had a non-discriminatory reason for doing so unrelated to her ‘sex’—‘safety concerns’ due to the discomfort-based complaints of other students.”

The American people have a right to know how the appointment of Judge Gorsuch to the Supreme Court would impact the rights of LGBT Americans, people living with HIV, and other at-risk communities who are entitled to rely upon the Constitution’s guarantees of equality, liberty, dignity and justice under the law. We urge the Committee to demand complete answers from Judge Gorsuch to the important questions that we and others have raised. Only by insisting that Judge Gorsuch answer these questions will the Committee fulfill its responsibility to the American people, and reveal the extent to which his nomination jeopardizes rights and liberties that many Americans believe are secure.