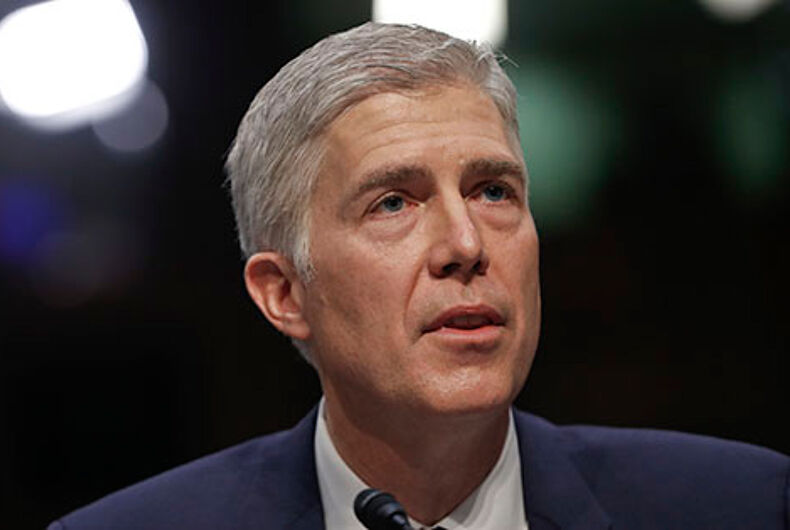 Neil Gorsuch returns to the hot seat Tuesday after making his case for why he should be the ninth justice to be seated on the U.S. Supreme Court. Monday’s Senate confirmation hearing, while split down party lines, shed no new light on concerns raised Friday by community advocates that called him “a significant threat” to LGBTQ Americans.

In the Colorado native’s opening statement, Gorsuch promised justice would be doled out equally to both “poor and rich,” and the federal judge said the role of a justice was “not about politics.”

“I will do all in my power to be a faithful servant of the Constitution and laws of this great nation,” Gorsuch said.

Gorsuch explained to the senate panel that, to him, those plain black robes a judge wears on the bench reflect independence, and he showed he has a sense of humor to match his earnestness.

“The robe does mean something to me,” he said, “and not just that I can hide the coffee stains on my shirt.”

Democrats, while respectful, were not in a joking mood, with the hearing coming a year and a week following then-President Obama’s nomination of Merrick Garland. Republicans blocked the centrist judge from getting a hearing in the Senate, and even refused to meet with him on Capitol Hill. Senators Ted Cruz and John McCain even vowed that had Democratic nominee Hillary Clinton prevailed in last November’s election, as had been expected, they would continue to block any nominee to the Supreme Court for as long as she was president.

Not unexpectedly, Cruz on Monday claimed the election had given Judge Gorsuch a “super-legitimacy,” because voters had instead chosen Donald Trump for president, which Democrats dismissed. Sen. Dick Durbin took the high road after two fellow Democrats groused about the GOP blockade, extending the judge “a courtesy which Senate Republicans denied to Judge Garland.”

Senator Patrick J. Leahy of Vermont called Gorsuch’s nomination something that was “selected by interest groups.”

No one publicly asked the judge about his reported link to billionaire Philip F. Anschutz, who The New York Times last week reported was represented by Gorsuch. In return, Anschutz pushed then-President George W. Bush to name him to Colorado’s federal judgeship. Anschutz, the paper reported, inherited an oil and gas firm and built it into an empire that has sprawled into telecommunications, railroads, real estate, resorts, sports teams, stadiums, movies, and conservative publications.

Also not on today’s agenda was any question raised by Lambda Legal, the Transgender Law Center, Transgender Legal Defense & Education Fund, Human Rights Campaign, and 15 other groups, which warned that Gorsuch’s record suggests he may oppose same-sex marriage and transgender rights.

Watch day one of the hearings below, starting around the 17 minute mark.