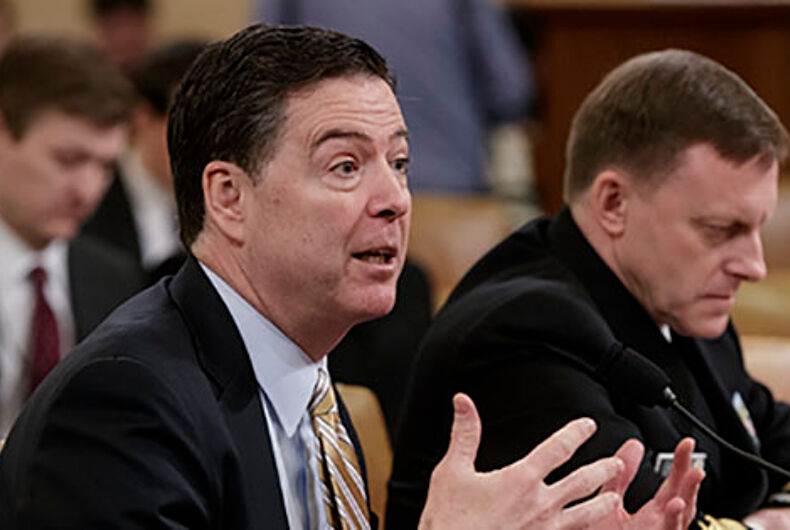 Two political bombshells dropped on Capitol Hill today, and they came from the mouth of the same man that some say cost Hillary Clinton crucial votes in the 2016 presidential election.

FBI Director James Comey told members of Congress at a hearing of the House Intelligence Committee that his agency is indeed investigating a potential link between the Kremlin and the campaign of President Donald Trump.

As the Washington Post reported, Comey repeatedly refused to name names, especially of anyone close to the president, who was or may now be under suspicion of any criminal wrongdoing. That, he said, was “so we don’t wind up smearing people.” Comey admitted it was not FBI policy to make such pronouncements about ongoing investigations, “but in unusual circumstances, where it is in the public interest it may be appropriate to do so.”

In this case, Comey was authorized to reveal what he did, unlike last year when he notified Congress 11 days before the presidential election, against the urging of the Department of Justice, that the FBI had reopened an examination of Hillary Clinton’s use of a private email server. The investigation ended prior to election day, yielding no further evidence, but analysts claimed it clouded the minds of undecided voters and cast just enough doubt to cost her votes she needed to beat Trump.

The jaw-dropping acknowledgement came close to the beginning of an intense 5 ½ -hour public hearing, which also examined the tweets the president sent earlier this month, accusing former President Obama of wiretapping his high-rise New York City residence, Trump Tower. As CBS News reported, Trump made the accusation without providing evidence and has yet to do so.

Comey testified under oath there is absolutely nothing to support the president’s claim.  “I have no information that supports those tweets,’’ he said. “We have looked carefully inside the FBI,’’ and agents came up with bupkis.

Rep. Adam Schiff of California, the ranking Democrat on the committee, asked Comey about the feasibility of such surveillance. Comey replied that no president could order that and that the Justice Department had asked him to specifically tell the committee that it also has no such information.