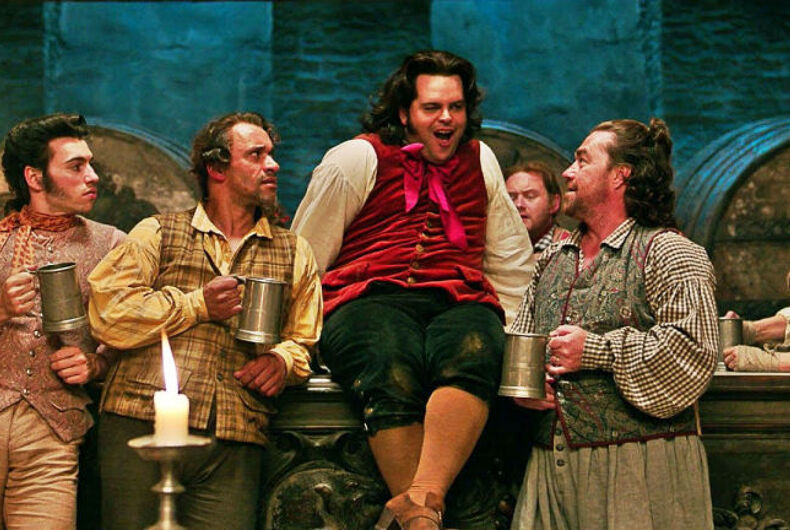 As it turns out, the “exclusively gay moment” in the new live-action Beauty and the Beast amounts to little more than a few seconds of some fleeting glimpses and momentary eye contact — hardly anything even worth mentioning. But that hasn’t stopped Christian extremist James Dobson from hyperventilating about evil homosexual agendas in the film, which has broken box office records.

“I am appalled by Disney’s blatant, agenda-driven decision to introduce homosexuality into a children’s classic which originally did not include this theme,” he said.

Of course, the original Beauty wwand the Beast was at least as queer as this remake. Composer Howard Ashman loaded down LeFou’s lyrics with double-entendres like “You can ask any Tom, Dick, or Stanley/And they’ll tell you whose team they’d prefer to be on,” while singing worshipfully about Gaston’s physical attributes.

The film has also been read as an allegory for how HIV renders those living with the virus as outcasts.

“It is a subtle yet clearly deliberate attempt to normalize homosexual behavior, starting with our children,” Dobson went on, echoing the “think of the children” arguments that have always been deployed against minorities, whether gay couples, trans people in bathrooms, or immigrants.

Right-wing media continues to hysterically froth over Disney’s “inclusion” of homosexuality, which in reality amounts to a man dancing with another man for no more than a few frames. A post on one site lamented that the company used music by Elton John in The Lion King, and longed for the days that Walt Disney fired an actor from Swiss Family Robinson for being gay.

“These moves, done in the name of diversity, are an invasion into the intimate role of parenting,” said Dobson. “They gratuitously expose children to a subject which falls solely in the domain of a mother or father to decide when and how to discuss.” This quote leaves an impression that Dobson probably did not intend, suggesting that Christian parents are so incompetent that their family’s entire system of values could be undermined by a film in which a man looks another man in the eyes.

Various boycotts have sprung up around the web, calling for parents to avoid Beauty and the Beast.

Dobson isn’t alone in his agitation. Billy Graham’s son Franklin Graham has spun wild conspiracy theories, claiming, “They’re trying to push the LGBT agenda into the hearts and minds of your children – watch out! Disney has the right to make their cartoons, it’s a free country. But as Christians we also have the right not to support their company. I hope Christians everywhere will say no to Disney.”

The film has currently held the number one spot at the box office for two weeks in a row.

Ellen goes to the dogs (and cats) with Oprah