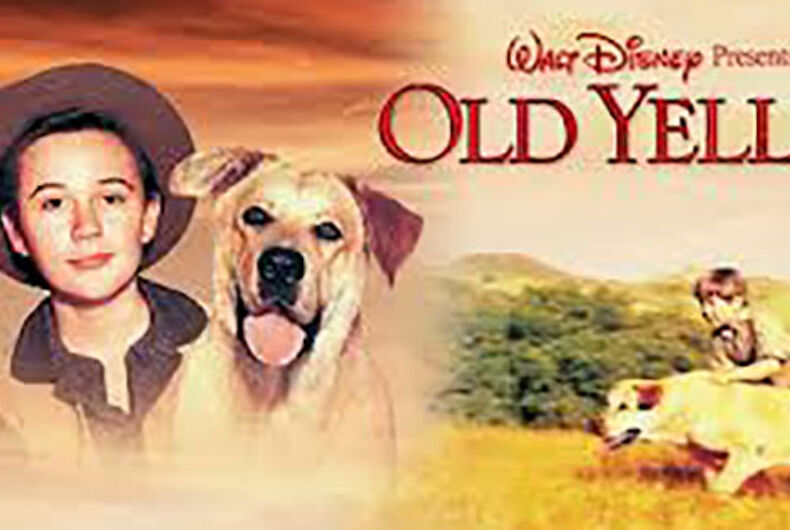 With all that’s been written about the Walt Disney Company’s embrace of the LGBTQ movement, from affirming TV shows like When We Rise to movies like Beauty and the Beast, from “gay days” at Walt Disney World to out singer Sir Elton John’s music for The Lion King and so on, it’s astonishing that precious little has been written about Tommy Kirk, Disney’s leading young male star of the late 1950’s and early 1960’s.

Many a gay boy, myself included, grew up watching Tommy mourn his dog in Old Yeller (1957), turn into a dog himself in The Shaggy Dog (1959), tame the savage wilderness with his brothers in The Swiss Family Robinson (1960) and reluctantly kiss Annette Funicello in The Misadventures of Merlin Jones (1964).

We loved Kirk in the movies and we loved him on television, playing one of The Hardy Boys along with Tim Considine. Growing up on Disney movies and television, I wanted to be like Tommy Kirk. And, in an unexpected sort of way, my wish was granted.

When I grew up I lost track of Tommy Kirk, and wouldn’t have thought of him again if my passion for old movies had not led me to Filmfax, the magazine for unusual movies and television.

The Kirk that emerges in this interview, after decades of obscurity and silence, is an older and wiser man; one who is willing to deal with the contradictions in his life and their effect on his career.

In its films and TV shows, comic books and theme parks, Walt Disney Studios created an ideal world for a Baby Boom generation growing up in the American Fifties. Walt Disney himself groomed Kirk to be the ideal “All-American Boy”; the epitome of young masculinity.

Unfortunately, “Tommy Kirk was a square peg being shoved into a round mouse hole;” a peg who had to be ejected before he damaged the works.

Kirk is gay–which is why he is in this column in the first place–a fact about himself hat he is quite open about and willing to talk about in his interview:

“I’m not ashamed of being gay, never have been and never will be. For that I have no apologies.” Kirk’s quotes are taken from Minton’s interview.

Born in 1941, the 13-year old Kirk was discovered in 1954 while performing at a Will Rogers, Jr. Pasadena Playhouse production of Eugene O’Neill’s Ah, Wilderness. The boy’s clean-cut good looks won him the attention of Uncle Walt, who signed Kirk to a long-term contract.

Kirk’s years at Disney, where he starred in a series of wholesome, family comedies and drama, were the high point of his show business career. “I want to be remembered for the [Disney] work, like Swiss Family Robinson and Old Yeller. I think Swiss is probably my favorite film”.

But Kirk knew that his homosexuality would jeopardize his movie career, clash with his All-American Boy image and anger both the homophobic Disney and Kirk’s “strict Baptist parents”. As a result, “I consider my teenage years as being desperately unhappy.”

“I knew I was gay, but I had no outlet for my feelings. It was very hard to meet people and, at that time, there was no place to go to socialize. It wasn’t until the early ’60s that I began to hear of places where gays congregated. The lifestyle was not recognized and I was very, very lonely.”

The idea of a lonely Tommy Kirk boggles the mind, but it wasn’t long before our hero met others who shared his proclivities. “I had some brief, very passionate encounters and as a teenager I had some affairs, but they were always stolen, back alley kind of things. They were desperate and miserable.”

Eventually, young Kirk came to terms with his sexual orientation: “When I was about 17 or 18 years old, I finally admitted to myself that I wasn’t going to change. I didn’t know what the consequences would be, but I had the definite feeling that it was going to wreck my Disney career and maybe my whole acting career. It was all going to come to an end. Eventually, I became involved with somebody and I was fired.”

The story goes that Disney personally fired Kirk after Kirk’s “backstreet affair” with “a younger actor” became the talk of the studio. “Disney was a family film studio and I was supposed to be their young, leading man. After they found out I was involved with someone, that was the end of Disney.” The year was 1964, and Kirk’s career was effectively over.

Just 23, Kirk was now “box office poison”. “After I was fired from Disney, I did some of the worst movies ever made and I got involved with a manager who said it didn’t matter what you did as long as you kept working.”

Kirk’s post-Disney performances ranged from cute and campy fluff like Pajama Party (1964) to unmitigated disasters like the godawful Mars Needs Women (1968) (Kirk played a Martian in both movies). To make things worse, Kirk got mixed up with drugs, a habit that ruined him financially and almost killed him. “I wound up completely broke. I had no self-discipline and I almost died of a drug overdose a couple of times. It’s a miracle that I’m still around.”

Like William Haines before him, Tommy Kirk discovered that there was life after movies. “Finally, I said, to hell with the whole thing, to hell with show business. I’m gonna make a new life for myself, and I got off drugs, completely kicked all that stuff. … I went out and started my own little carpet and upholstery cleaning business. I’ve done it for 20 years and I live well. … I have a nice business, a nice pension and friends.”

Though his film-making days are behind him, Kirk has since appeared in one reunion show produced by the now-gay-friendly Disney Corporation. The Tommy Kirk Story might not be over yet.

A version of this article first appeared on Bilerico in 2010.

Now New Hampshire Republicans are jumping on the anti-transgender bandwagon