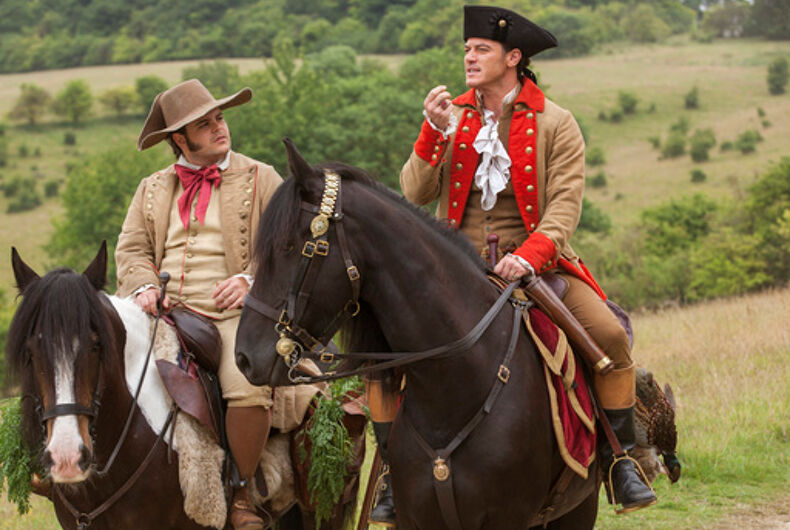 This image released by Disney shows Josh Gad as Le Fou, left, and Luke Evans as Gaston in a scene from, "Beauty and the Beast," opening nationwide on March 17. Photo: Laurie Sparham/Disney via AP

An Alabama drive-in theater won’t show Disney’s live-action remake of Beauty and the Beast because it includes a gay character, WHNT19 reports.

“It is with great sorrow that I have to tell our customers that we will not be showing Beauty and the Beast at the Henegar Drive-in when it comes out,” the theater wrote in a Facebook post Thursday night. “When companies continually force their views on us we need to take a stand. We all make choices and I am making mine.”

By Friday morning, fewer than 12 hours after the theater made its statement, the post had received more than 600 share and 500 comments. But by Friday evening, the drive-in’s Facebook page was gone. WHNT19 said it’s not clear if it was removed by the theater or taken down by Facebook, and Henegar Drive-in had not responded to a request for comment.

The owners said they took issue with the film introducing a “homosexual character” and with Director Bill Condon’s promise of a “surprise for same-sex couples.”

Condon told Attitude magazine that Gaston’s manservant LeFou is just starting to find himself in the film.

“LeFou is somebody who on one day wants to be Gaston and on another day wants to kiss Gaston,” Condon told the magazine. “He’s confused about what he wants. It’s somebody who’s just realizing that he has these feelings. And Josh makes something really subtle and delicious out of it. And that’s what has its payoff at the end, which I don’t want to give away. But it is a nice, exclusively gay moment in a Disney movie.”

While it sounds to us like a sweet secondary plot line that likely culminates in nothing more risqué than a kiss, one can only imagine what a homophobe would make of that quote — “confused…subtle…delicious…exclusively gay.”

Henagar Drive-In owner Carol Laney told WHNT19 that she and her husband took ownership of the theater in December and set out to only show movies that aligned with their religious beliefs.

“As business owners we take pride and caution in showing discernment in what we play at our drive-in,” Laney said. “This by no means is sending a message of hatred or bigotry. However, we are Christians first and foremost and must admit to our Bible and Christianity.”

A friend of Laney’s said the decision not to show Beauty and the Beast didn’t come from a place of hate.

“When she first bought the drive-in, she told me ‘I’m trying to look and see if I can get me sensors to block curse words and stuff.’ She’s very serious about this. I mean she’s been that way since she bought it,” said friend Megan Garner.”I don’t think that Carol is aiming this toward a group of people. I think she’s just standing up for what she believes in.”