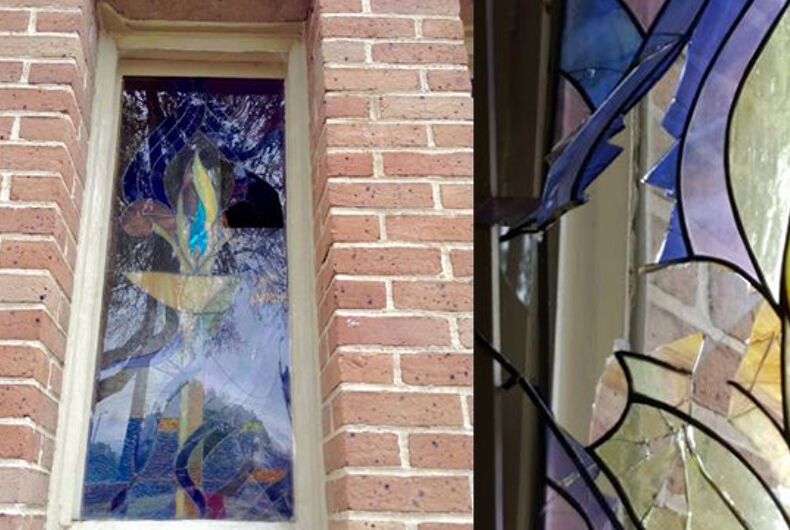 A church’s stained glass window was partially shattered with a brick during a worship service on Sunday at the First Unitarian Universalist Church of New Orleans less than two days after hosting a town hall on anti-transgender violence.

The town hall was well publicized, reports The Times-Picayune. It was organized by transgender advocacy group Transitions Louisiana, after two transgender women were murdered in New Orleans two days apart: Chyna Gibson, 31, on Feb. 25 and Ciara McElveen, 25, on Feb. 27.

Rev. Paul Beedle said no one was injured in the incident. A congregant discovered the broken window while walking in the church’s Memorial Hall while the service was underway, he told the paper. He said it was still intact at 10:30 a.m., during choir practice, so he believes the brick was thrown sometime between then and the following hour.

“At this time, we do not have evidence that would link the simple criminal damage to property incident today with Friday’s event,” NOPD spokesman Aaron Looney said in a statement.

The window is part of a triptych created by a member of the church. The imagery tells the story of the church’s recovery after Hurricane Katrina.

“If they wanted to pick a window that we had some real fresh emotional attachment to, that was the one,” Beedle said.

The church is known to be LGBTQ affirming, and Rev. Deanna Vandiver said the attention the town hall received may have “stirred up hate mongering.”

Much like after Katrina, the church plans to soldier on and carry on with its mission and its work.

“This does not change our resolve to stand by our transgender neighbors and any neighbors who are oppressed or marginalized in our community,” Beedle assured.

Was this Texas lawmaker caught on tape calling a transgender man a ‘pervert’?