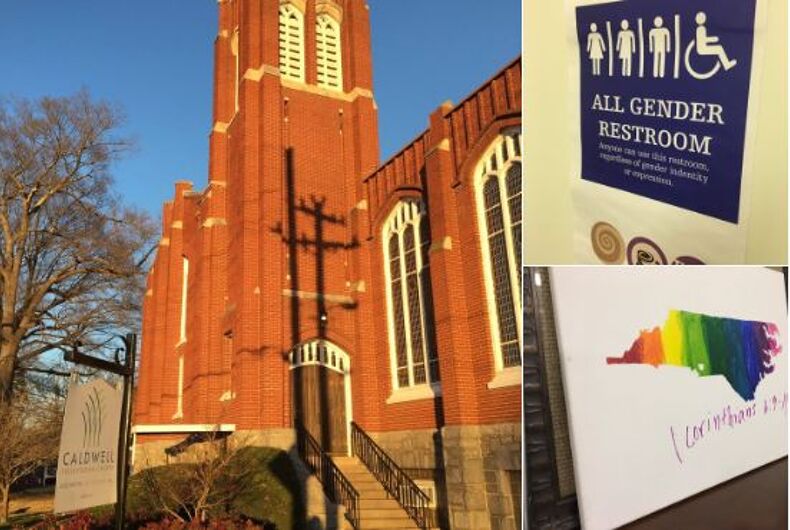 A welcoming church in Charlotte, North Carolina was broken into, vandalized and burglarized in what churchgoers are calling a targeted attack on the LGBTQ community.

The perpetrator, or perpetrators, broke in through the window of Caldwell Presbyterian Church’s all gender restroom on Wednesday night, before tagging a painting of a rainbow colored North Carolina with a Bible verse condemning, in part, homosexuality.

They also stole a number of items from the church’s in-house retail coffee shop, including a grinder, a kettle and bags of coffee.

That same bit of scripture, 1 Corinthians 6:9-11, ironically enough also condemns thieves as unworthy of entering into “the Kingdom of God.”

The church was broken into the previous week as well, but that nothing seems to have been taken at that time and the only damage done was a busted window.

“This one has a different feel about it for some reason. It almost seems like a message of some sort. We don’t know,” a church member told WSOC-TV.

“We are not going to let it stop us,” they added.

Whoever broke in “clearly meant to send a message. This doesn’t fit the description of a hate crime, but it’s a clear attempt at intimidation,” Rev. John Cleghorn told The Charlotte Observer.

Mayor Jennifer Roberts, whose husband is the accompanist for the church choir, sent her “thoughts and prayers” to what she called “an inclusive, welcoming, and diverse church.”

She added that the “break-in, vandalism and hateful messages left show that we have a lot of work to do to end discrimination in our community.”

My thoughts and prayers are with the Caldwell Presbyterian Church family. pic.twitter.com/tyGfjRKrlw

Charlotte voted to expand their non-discrimination ordinance to include LGBTQ protections, which was nullified by House Bill 2 (HB2), passed by the North Carolina General Assembly.

The church has hosted events for both Charlotte Pride and Charlotte Black Gay Pride in the past.

In Trump’s America, Christian proselytizing is another form of oppression