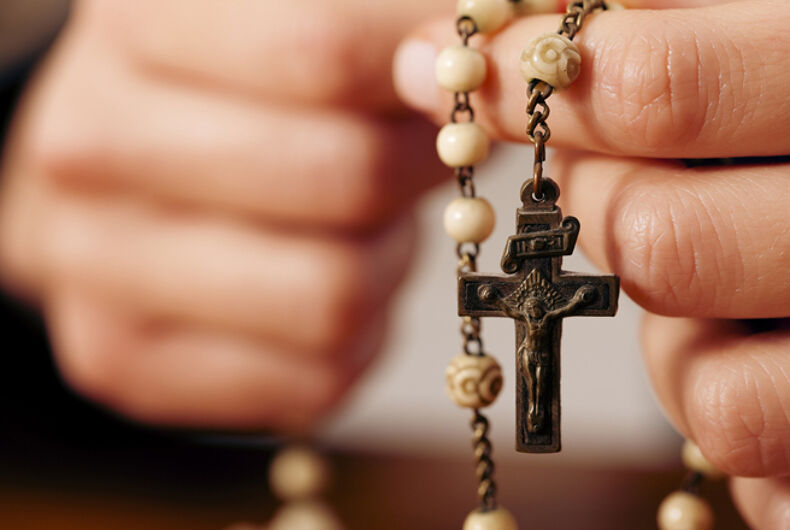 First Lady Melania Trump read from a script that included “The [Christian] Lord’s Prayer” as part of her introduction of her husband at a rally in Florida, Saturday, Feb. 18, 2017. She did this at a time when Donald has consistently marginalized Muslims, and when reported hate crimes against Muslims and Jews (in addition to Blacks, Latinx, and LGBTQs) has continually increased since Trump’s election.

Where is the supposed separation of “church and state”? Trump has, though, fortified the already solid and impenetrable wall between “mosque and state” and “synagogue and state.”

During Trump and Pence’s inauguration ceremonies, six religious clergy offered prayers and Biblical readings atop the balcony of the U.S. Capitol, interspersed by Trump and Pence placing their left hands on a stack of Bibles during their swearing-in ceremonies. Ending the festivities, sounds emanated from the Mormon Tabernacle Choir.

Clergy invited to read and offer prayer at the inauguration included five Christians and one Jew. As I watched the proceedings on TV, I questioned whether I was viewing a presidential swearing-in or, rather, attending an evangelical tent revival as clergy invoked the name of Jesus at least eight times.

Not wanting to exclude Muslims, he said during his inaugural address, in usual Trump fashion, “We will reinforce old alliances and form new ones — and unite the civilized world against radical Islamic terrorism, which we will eradicate completely from the face of the Earth.”

Trumps continual marginalization of Muslims in his rhetoric and in his attempts to impose travel bans against people from the seven majority-Muslim countries where he has no direct business ties are testaments (pun intended) to his feelings about the followers and precepts of Islam.

On International Holocaust Remembrance Day (27 January 2017), throughout his ceremonial speech commemorating the Holocaust, Trump denounced the “horror inflicted on innocent people by Nazi terror” while never once mentioning Jews and anti-Semitism.

While the Nazis targeted several groups for interrogation, incarceration, and death, the regime singled out the Jewish people for mass genocide as their “final solution.” Though Trump has only a limited grasp on world history, we should at least assume that even he would know this basic fact.

The Washington establishment and the financial and media corporations that fund it exist for only one reason: to protect and enrich itself….For those who control the levers of power in Washington, and for the global special interests….This is a conspiracy against you, the American people, and we cannot let this happen or continue. This is our moment of reckoning as a society and as a civilization itself.”

Donald Trump may not have a general grasp of politics and history, but he certainly understands how to use of the propaganda of fascism to sway public opinion. Donald will never admit to lifting the sentiments and words almost verbatim from the notorious Protocols of a Meeting of the Learned Elders of Zion.

The Protocols are a fabricated anti-Semitic text dating from 1903 that was widely distributed by Russian Czarist forces to turn public opinion against a so-called “Jewish Revolution” for the purpose of convincing the populace that Jews were plotting to impose a conspiratorial international Jewish government.

During his recent marathon and rambling White House press conference, Trump was asked by Jake Turx, an orthodox Jewish reporter, about the recent spike in reported anti-Semitic incidents across the country. Turx made it clear, using an agreeable tone, that he was not charging the President of anti-Semitism:

“Despite what some of my colleagues may have been reporting, I haven’t seen anybody in my community accuse either yourself or anyone on your staff of being anti-Semitic. We understand that you have Jewish grandchildren. You are their zayde,” (an affectionate Yiddish word for “grandfather”).

At this point, Trump said, “Thank you.” Turx then asked his question: