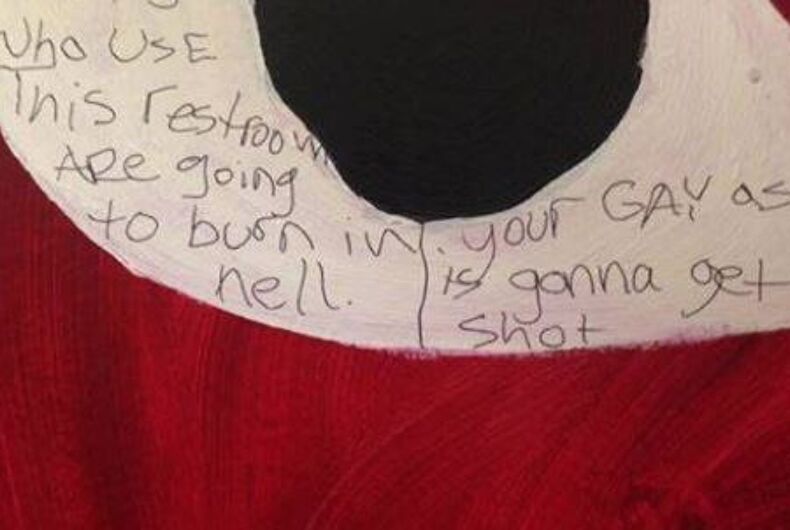 Graffiti found on a mural in a gender neutral bathroom at the Portland high school. Photo: Courtesy of Callie Quinn-Ward

The week after the Trump administration backed away from ensuring transgender students rights are protected, someone vandalized the mural in a gender neutral bathroom at a high school in Portland, Oregon. It included a homophobic slur and a death threat.

“The fagots (sic) who use this restroom are going to burn in hell. Your gay ass is gonna get shot,” the message read.

The families of students at Grant High School had not been informed as of yesterday, even though the incident occurred on Feb. 27, reports The Oregonian.

Principal Carol Campbell said she would inform families this week of the “hurtful” graffiti and that she has been meeting with students who feel threatened. She also said in a statement that the incident was being investigated “internally.”

“For me and other queer students, this was viewed as a direct threat and challenged our basic notion of security at school,” student Callie Quinn-Ward told KOIN-6 in an email.

“Walking through the halls, you hear slurs and homophobic language all the time I think for a lot of people who aren’t queer it came as a complete shock because they’re not aware of how much this goes on on a daily basis,” she said.

Quinn-Ward questioned why families weren’t informed of the incident sooner in an interview with The Oregonian.

“I know students who didn’t come to school this week because of this,” Hawley-Blue said. “I was disappointed how this was handled by my administration.”

He feels the school tried to cover up the incident. The graffiti was painted over, but is still visible. He says it serves as a potent metaphor.

He and other students brought their concerns to a Portland Public Schools board meeting on Tuesday night.

Portland Public Schools Interim Superintendent Bob McKean sent a letter out to families days before the mural was vandalized, reassuring them that the federal government’s recent decision to not press for public schools to respect students’ gender identity, would not reduce protections for trans students in the school system.

“We each have a role in ensuring that all students, including those who are transgender, can learn and succeed in school without fear of bullying, harassment or isolation,” McKean wrote. “If you suspect or witness any behavior that runs counter to our values of equity and inclusion for all, please report it immediately to a school leader or to the central office.”

Grant High School will convert all of their bathrooms to gender neutral, with stalls that have floor to ceiling doors, when it reopens in 2019 after renovations.