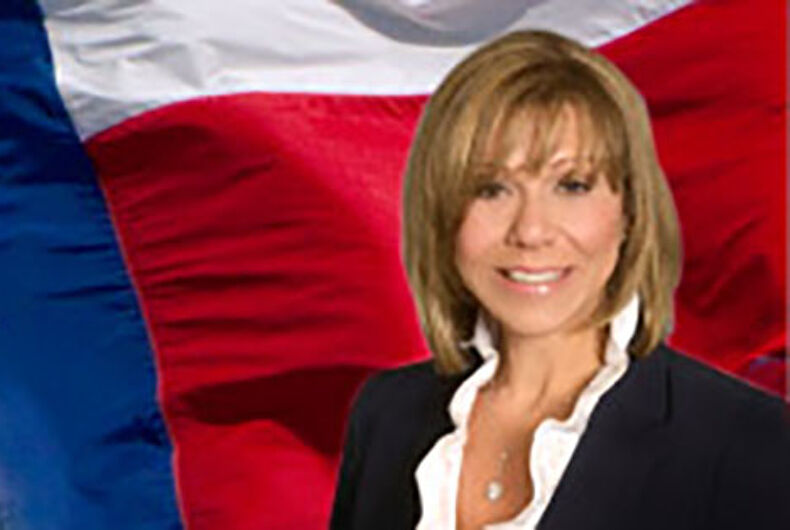 Those three words may not have been heard by anyone attending last week’s hearing on the Texas bill to prohibit transgender people from using any bathroom other than the one corresponding to their birth certificates.

But a close listen to the recording of that hearing on Senate Bill 6, the so-called “Privacy Protection Act,” reveals that State Senator Joan Huffman apparently muttered those offensive words, and her microphone picked them up.

Huffman and her colleagues from both sides of the aisle were listening to testimony by Dr. Colt Keo-Meier, a clinical psychologist and trans man. He was responding to a question from a Democratic state senator about how trans people respond to accusations that they are “perverted.”

“As a person of God, I have to say, ‘Father, forgive them, for they know not what they do,”” Keo-Meier testified. “To tell someone that they are a pervert, for telling them the truth about their life, who’s the perverted one in that case?”

Sen. Huffman was off-camera at the time of the recording, but was running the hearing. Listen for yourself in this video, edited by Houston Equality.

What the camera did catch, however, was Huffman not paying attention during Keo-Meier’s testimony,

She appeared to be more concerned with sorting through her pocketbook than listening to his plea to not oppress trans people.

Dr. Keo-Meier was profiled by transgender advocate Brynn Tannehill in our 50 Successful Transgender Americans to Know report in January.

The entire hearing was posted to YouTube. Listen to the unedited version below by scrolling ahead to the 00:27:30 mark.

How improv helped this ‘Whose Line Is It Anyway?’ star accept his trans child