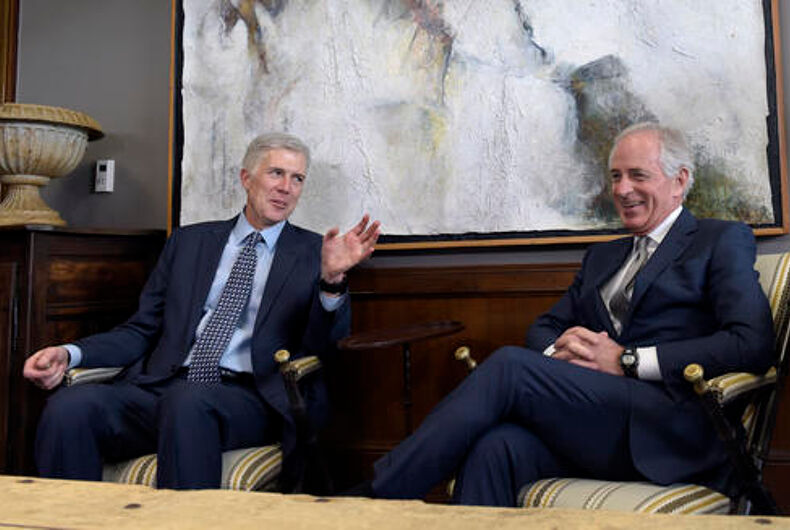 People have been searching for clues to what President Donald Trump’s pick for the U.S. Supreme Court would mean for the LGBTQ community. From recently won marriage rights, to a pending case on transgender rights, there is a lot to lose.

While nominee Neil Gorsuch’s published record is short on rulings related to LGBTQ rights, some have suggested that his record on other hot button social issues and past statements about gay marriage rights indicate he won’t be an ally.

“I have never felt the least whiff from him of homophobia or intolerance toward gay people,” said Joshua Goodbaum, who worked as a law clerk for Gorsuch in 2009.

Rather, he said, Goruch showed support for his former law clerk’s same-sex marriage. Now an attorney, Goodbaum said that his former boss offered warm words when they chatted the week of his 2014 wedding.

“He said, ‘This is a wonderful thing. You’ll see how your relationship grows,’” Goodbaum recalled.

But in 2005, Gorsuch wrote in an article for the National Review that the court was not the proper to sort out social issues, such as marriage equality.

“[Liberals] have become addicted to the courtroom,” he wrote, “relying on judges and lawyers rather than elected leaders and the ballot box, as the primary means of effecting their social agenda on everything from gay marriage to assisted suicide to the use of vouchers for private-school education.”

Gorsuch also ruled in favor of protecting “religious objections” to contraception in the landmark Hobby Lobby case, which some have interpreted as evidence he would support similar efforts to deny LGBTQ rights.

Watch: LGBTQ Trump supporters complain about being ‘excommunicated’ by peers