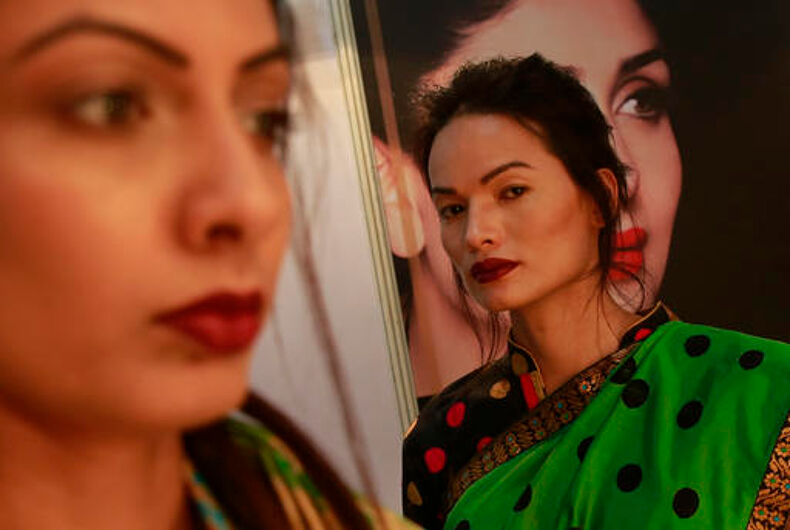 In this Feb. 2, 2017 photo, Anjali Lama, a transgender model from Nepal, stands backstage at the Lakme Fashion week in Mumbai, India. Growing up as the fifth son in a poor farming family in rural Nepal the dream to be a fashion model came late in life. First came a long, painful struggle to accept that he felt deeply female. It was a chance encounter with a group of transgender women that turned Lama's life around by putting her in touch with the Blue Diamond Society, an advocacy group for Nepal's LGBT community. In 2005 she came out to her friends and family as a transgender woman. Photo: AP Photo/Rafiq Maqbool

NEW DELHI (AP) — It was her big moment. Anjali Lama sashayed down the catwalk in the swanky Mumbai auditorium. A fitted, cream dress highlighted her tall, slender frame. Her pulled-back hair showed off her high cheekbones.

Modeling at Lakme Fashion Week often seemed like a dream far beyond her reach, but Lama has become the first transgender woman to model at one of the top events on India’s fashion calendar and one sponsored by a top Indian cosmetics brand.

Growing up as the fifth son in a poor farming family in Nepal, Lama didn’t dream early in life to be a fashion model. First was the painful struggle to accept that she felt deeply female.

“I knew even as a child that I didn’t like being a boy, wearing those clothes,” Lama said by phone as she juggled fittings and photoshoots in Mumbai, India’s entertainment capital.

The years in the village were hard. Other children in school made fun of the boy, then called Nabin Waiba, and she struggled with figuring out why she felt so uncomfortable.

“I began to feel really confused and depressed. I kept asking myself ‘I’m a boy, so why do I feel this way?’

“I tried to change but it was mental torture.”

Coming to Kathmandu as a teenager brought some anonymity but few answers.

“I would walk around the city and see the beautiful saris and dresses in shop and wish I could dress like that. I used to wish God had made me a girl,” she said.

A chance encounter with transgender women turned Lama’s life around by putting her in touch with the Blue Diamond Society, an advocacy group for Nepal’s LGBT community.

In 2005 she came out to her friends and family as transgender.

“It was like a rebirth for me. I remember thinking, ‘Oh my God, I’m not alone in this world. There are others like me,’ she said.

Five years later she got silicone breast implants. The dream of a career in fashion followed.

“People began to notice me and tell me how I had the figure and height to become a model. That felt very nice.”

A magazine wrote a cover story about transgender people in Nepal and put her on the cover.

She felt close to her dream but it continued to elude her. After years of struggling and getting only small gigs in her home country, Lama decided to try her luck in India’s massive fashion industry.

“I felt I had to at least try and take a chance.”

And that chance came in December when after two failed auditions she finally made the cut.

“I’m very, very excited. I’m trying to just enjoy this moment,” she said, giggling over the phone. “This is a dream come true.”

In the Trump age, civil disobedience is cast as ‘terrorism’ to squelch protest