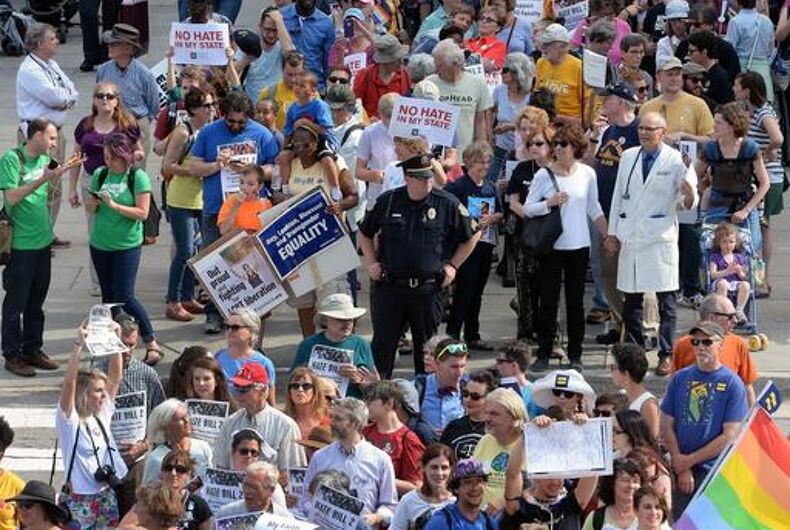 FILE - In this April 25, 2016 file photo, protesters head to the legislative building in Raleigh, N.C., for a sit-in against House Bill 2, a contentious law that limited protections for LGBT people. After a string of major gains in recent years, LGBT activists are bracing for a different task in 2017 - trying to prevent Republicans in Congress and state legislatures from undermining those gains. Photo: Chuck Liddy/The News & Observer via AP, File

NEW YORK (AP) — After a string of major victories in recent years, LGBTQ activists are bracing for a different task in 2017 — trying to prevent Republicans in Congress and state legislatures from undermining those gains.

They view President-elect Donald Trump and many of his Cabinet selections as disinterested — and in some cases hostile — when it comes to the various issues of civil rights and anti-discrimination protections that concern lesbian, gay, bisexual and transgender Americans.

At the state level, with Republicans controlling a sizable majority of legislatures, there’s already a push for measures which LGBTQ activists view as discriminatory. For example, legislators in several states — including Alabama, Missouri, South Carolina, Texas, Virginia and Wisconsin — are advocating for laws that would bar transgender students from using bathrooms or locker rooms that don’t match their biological gender at birth.

“2017 is going to be our toughest year yet,” said the National Center for Transgender Equality in a recent fundraising appeal.

There also may be a push in some states for so-called “religious exemption” laws that would allow some businesses and civil servants to refuse services to LGBT people if their decisions were deemed to be based on religious belief.

In Congress, conservative Republicans plan to address the religious-exemption issue by relaunching the First Amendment Defense Act, which would prohibit punitive federal action against people and institutions that define marriage as a union of one man and one woman. The measure failed to advance during two previous sessions, but may gain more traction now, with Trump promising to sign it if it reaches his desk.

Ian Thompson, a legislative specialist with the American Civil Liberties Union, says the proposed act “would open the door to unprecedented taxpayer-funded discrimination, allowing anyone to act with impunity in rejecting same-sex couples.”

“It will protect individuals, regardless of their beliefs about marriage, from being deprived of eligibility for federal grants, licenses and employment because of their deeply held convictions,” Lee says.

Among other objectives, the measure would prevent the IRS from revoking the tax-exempt status of religious institutions because of their refusal to accommodate same-sex marriages.

Although prominent social conservatives consider passage of the act a high priority, its prospects are uncertain. LGBTQ-rights groups and the Democratic leadership strongly oppose it; Thompson doubts it would gain enough votes to overcome a Democratic filibuster in the Senate.

It’s also unclear how many of the state measures seeking to curtail LGBTQ rights will be enacted. One state with such a law in effect — North Carolina — has suffered a backlash that included cancellation of planned business and sports activities in the state. Business coalitions have formed in several other states — including Texas, Mississippi and Tennessee — to oppose enactment of like-minded bills, and Georgia’s Republican governor, Nathan Deal, vetoed such a measure last year.

Mississippi did enact a religious-exemptions bill last year, but a federal appeals court has blocked it from taking effect. The law would allow clerks to cite religious objections to recuse themselves from issuing marriage licenses to same-sex couples, and would protect merchants who refuse services to LGBT people.

Texas is likely to be a high-profile battleground this year. Lt. Gov. Dan Patrick, a key player in setting the legislative agenda, is backing a North Carolina-style bill that would ban transgender people from using public bathrooms of their choice.

“The people of Texas elected us to stand up for common sense, common decency and public safety,” Patrick said at a news conference Thursday.

A statewide business coalition counters that Texas could lose billions of dollars and tens of thousands of jobs if it pursues the legislation. Such intervention by the business community is viewed by LGBTQ activists as vital now that chances for gains at the legislative level have diminished.

James Esseks, director of the ACLU’s LGBT Project, depicted the push for religious-exemption bills as “Plan B” for social conservatives after their “Plan A” failed when the U.S. Supreme Court ruled in 2015 that same-sex marriage should be legal nationwide.

“If they have to live in a world with LGBT equality, they want to carve out a refuge for themselves,” Esseks told a recent media briefing.

Some opponents of the LGBTQ-rights movement are urging the incoming Trump administration to reverse gay-friendly actions backed by President Barack Obama.

In Congress, the House Freedom Caucus is calling on the new administration to scrap an Education Department initiative advising school districts to let transgender students use restrooms and locker rooms based on their gender identity, as opposed to the gender on their birth certificate.

The caucus also wants to revoke non-discrimination protections in the Affordable Care Act that have benefited LGBTQ people.

On another front, the conservative Family Research Council says State Department employees who promote LGBTQ-rights causes abroad should be “ferreted out” and replaced by conservatives. The Human Rights Campaign denounced this proposal as “illegal and vindictive.”

In another initiative, dozens of prominent conservative academics and religious leaders recently co-signed a statement calling for elimination of all federal, state and local laws establishing civil rights protections on the basis of sexual orientation or gender identity.

Such measures “empower the government to use the force of law to silence or punish Americans who seek to exercise their God-given liberty to peacefully live and work consistent with their convictions,” the statement said.