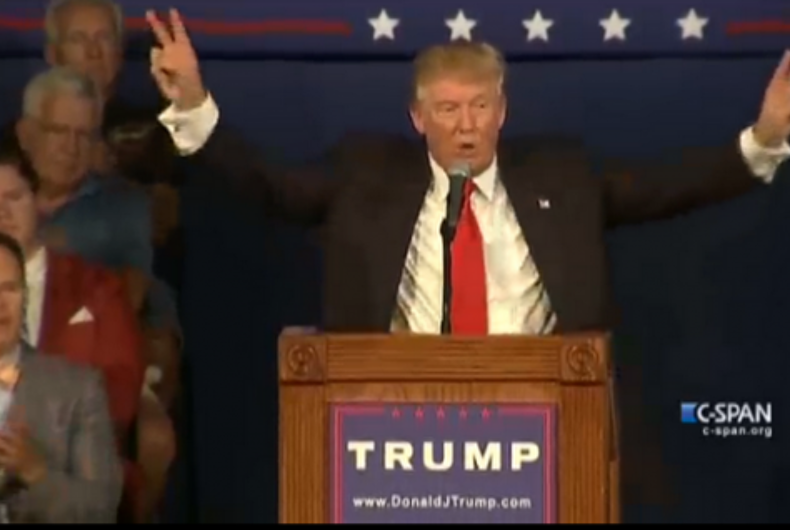 Donald Trump has made it his life’s mission to vanquish his “many enemies” — real and imagined.

Happy New Year to all, including to my many enemies and those who have fought me and lost so badly they just don't know what to do. Love!

In this regard, Trump behaves more Nixonian than Richard Nixon himself.

Unofficially referred to as “Nixon’s Enemies List,” the former president, prior to his resignation in disgrace, kept a record of his major political opponents. It was compiled by Charles Colson, Nixon’s special counsel to the White House, and written by Colson’s assistant, George T. Bell.

Officially titled the “Opponents List” and the “Political Enemies Project,” Bell distributed it as a memorandum to Nixon’s White House Counsel, John Dean, in September 1971. Dean publicized the list while testifying on June 27, 1973 in front of the Senate Watergate Committee investigating the burglary at the Democratic National Committee offices at the Watergate office complex in Washington, D.C.

“This memorandum addresses the matter of how we can maximize the fact of our incumbency in dealing with persons known to be active in their opposition to our Administration; stated a bit more bluntly – how we can use the available federal machinery to screw our political enemies.”

With Nixon’s insatiable narcissistic craving for attention and admiration, coupled with his intense and all-consuming paranoia, ultimately, the only person Nixon vanquished was himself, Richard Milhous Nixon.

Unfortunately, Donald Trump is marching down the path paved by Nixon. Omarosa Manigault, Trump’s campaign director of African American outreach and a former contestant on “The Apprentice,” warned that their team is compiling a list of people who did not support Trump’s candidacy. Though Nixon attempted to withhold divulging the existence of his “enemies list,” Trump is extremely transparent in his attempts to screw his political enemies. According to Manigault in an interview with the Independent Journal Review:

“Let me just tell you, Mr. Trump has a long memory and we’re keeping a list,” she said. “It’s so great our enemies are making themselves clear so that when we get into the White House, we know where we stand.”

Not only has Trump publicly called out his political rivals in demeaning and humiliating terms, he has consistently demonized and demeaned the media, called into question the efficiency and reliability of the entire political intelligence community, challenged world leaders such as Angela Merkel of Germany while lavishing praise on brutal dictators like Vladimir Putin, verbally attacked the work of the United Nations, questioned our continuing involvement in NATO, and spoken derogatively against people who do not share all of his demographic identities – all this before ever stepping foot in the Oval Office as President.

If Trump continues down Nixon’s path, with his insatiable narcissistic craving for attention and admiration, coupled with his intense and all-consuming paranoia, ultimately, the only person Trump will vanquish will be himself, Donald John Trump.

He still has the space and time, however, to switch course and walk a different path, one envisioned in the prophetic words of Senator Robert F. Kennedy, which he spoke during his run for the presidency in 1968:

“When you teach a man to hate and fear his brother, when you teach that he is a lesser man because of his color or his beliefs or the policies he pursues, when you teach that those who differ from you threaten your freedom or your job or your family, then you also learn to confront others not as fellow citizens but as enemies, to be met not with cooperation but with conquest; to be subjugated and mastered.”