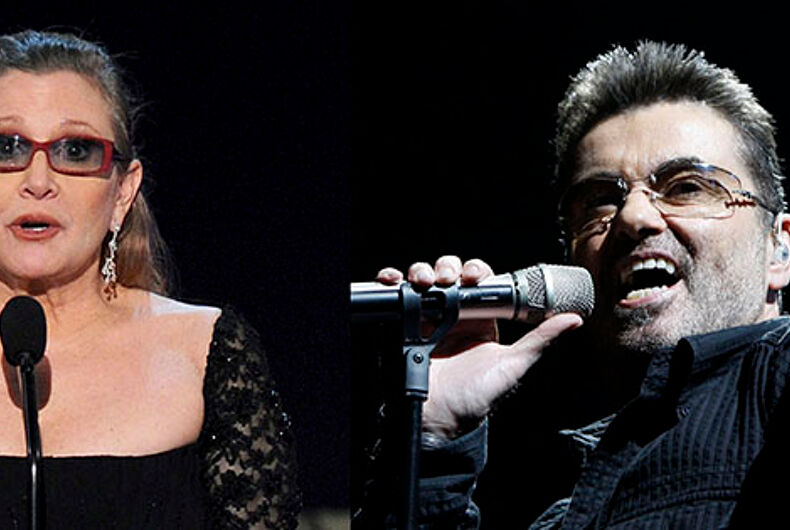 Evangelist Franklin Graham, who will join President-elect Donald J. Trump at his inauguration as one of six clergymen to lead the nation in prayer, has proclaimed that singer George Michael and actress Carrie Fisher have gone to hell unless they accepted Jesus as their savior before dying last month.

The son of legendary preacher Billy Graham posted this dire declaration on Facebook on December 27th. He wrote, “The decision that will determine where we spend eternity is whether we have believed in His Son, Jesus Christ, trusting Him as our Savior and following Him as Lord. There are no VIP passes or exceptions.”

The out pop icon passed away on Christmas Day, survived by his boyfriend Fadi Fawaz. Fisher, who died two days later, had a child with a gay man. Her mother, actress Debbie Reynolds, died one day later on December 28.

As PinkNews reported, since Michael’s death a stream of tributes have made mention of the singer’s extraordinary generosity and anonymous philanthropy, and how he donated millions of dollars to charitable causes without revealing his identity.

But to the president of the international Christian charity Samaritan’s Purse,  gay Christians are “the enemy,” and North Carolina Republicans who have failed to repeal House Bill 2 are heroes.

And Graham has denounced LGBTQ teachers and school administrators, saying: “So many school districts now are controlled by wicked, evil people, and the gays and lesbians… I keep bringing their name up, but they are at the forefront of this attack against Christianity in America.”

Graham is but one of six anti-LGBTQ preachers who will deliver a benediction and read from scripture at the Trump inauguration.