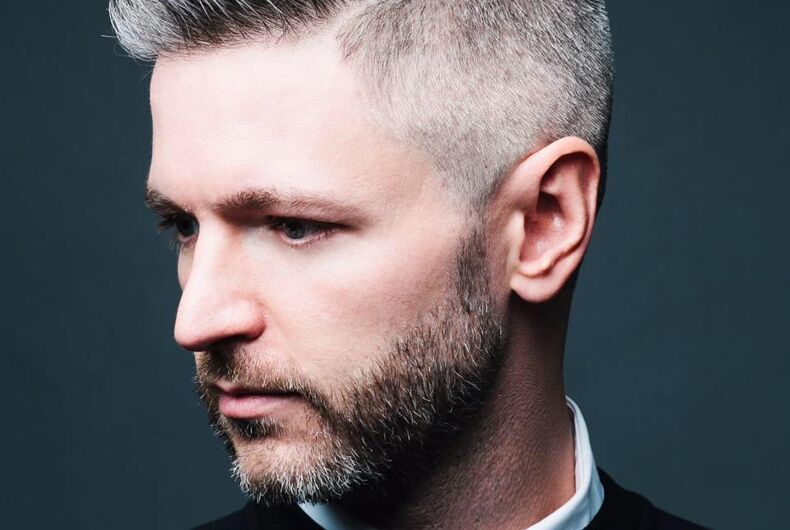 Musician and sometimes “RuPaul’s Drag Race” judge Lucian Piane is at it again, off on another attacking and worrying Twitter tear.

We previously reported Piane went off on Hillary Clinton, claiming he trusted Donald Trump over her and that she would never earn his vote. He instead voiced some support for Green Party candidate Jill Stein, and eventually reported writing in Bernie Sanders.

While this upset some of his fans, they hadn’t seen anything yet.

Shortly thereafter, and just days before the election, Piane took to Twitter once more to call the Clintons and Obamas murderers. He also added the charge of pedophiles for the Clintons.

Piane also went after celebrities like Ellen DeGeneres, Portia de Rossi, Anderson Cooper and Madonna. He also mocked a man for being HIV-positive and questioned whether he was paid enough for the work he did for RuPaul, who has so far stayed silent through his tirades.

He also advised bathing in bleach and talked of a “weird fungusy parasite thing” that is in all of our bodies, controlling our brains. He now appears to believe he has beaten it, claiming his body is changing as it begins to leave.

Now Piane is telling black people they should embrace the n-word and that Jewish people need to get over the Holocaust. He has also tweeted out stereotypes about Asians, as well as continuing to insult celebrities and anyone who tries to suggest he get help or back down from his onslaught of personal attacks.

There’s more: he also claims Hillary Clinton has a penis, as well as sharing a photo of his own with the text, “Check out my AIDSY hobo dick, China!”

We will spare you that one, but here are some of his other tweets in this latest display:

Twitter has been cracking down on hate speech and bullying, sparking endless debates about free speech and what constitutes harassment and “taking it too far.”

When Breitbart tech editor Milo Yiannopoulos set his trolling sights on Leslie Jones shortly after the release of the “Ghostbusters” remake, saying she looked like a man and posting screenshots of doctored images making it look like Jones had tweeted out racist and offensive comments that she hadn’t actually authored, it ultimately led to his legion of racist fans taking the harassment even further. She became the victim of a hack and nude photographs of her were posted to the homepage of her website.

Yiannopoulos took to Facebook to feign empathy, arguing that as much as he took no joy in the hack he couldn’t help but believe that had Twitter not banned him Jones would not have been so victimized.

Bannon, who once called progressive women “dykes,” has called Breitbart “the platform of the alt-right,” leading to concerns that he himself may hold bigoted views. His ex-wife claimed in sworn testimony that Bannon did not want his daughters attending a school with Jewish students, giving further credence to the fears. Trump told The New York Times that he wouldn’t have hired Bannon if he were part of the alt-right, in spite of Bannon’s claim of previously running their main media arm.

Twitter also recently banned the white nationalist credited with coining the term “alt-right,” Richard Spencer, as well as a host of other white nationalists and neo-Nazis, including reality TV “star” Tila Tequila.

Back in May, rapper Azealia Banks had her account suspended for her racist and homophobic attack on former One Direction singer Zayn Malik.

Some have suggested RuPaul will have to issue a statement with this latest outburst. But considering her penchant for an anti-trans slur, maybe we shouldn’t hold our breath on that one.

Will they stay true to their recent statement declaring they will fight against hate speech in all its forms? Or will they let Piane’s verified account live on?

It also appears more likely that Piane does require some mental health help, which we hope he acquires. If it takes this to get him to a better place, so be it, but in the meantime Twitter has to ask itself how thoroughly it wants to adhere to its terms of service.

If slurs are wrapped in some fuzzy love talk, does that excuse them? And what about his direct bullying of people like Tyler Oakley? He seems to be in clear violation of their rules.

Stay tuned. We will follow this story as it unfolds.

UPDATE: RuPaul appears to be responding on Twitter, without mentioning Piane by name:

Please show some compassion. We are ALL just a few blood sugars away from a psychotic breakdown. pic.twitter.com/zY1QNDQYp9

People who live in glass houses shouldn't throw stones. We ALL walk a fine line when it comes to mental health. Please show some compassion.

South Dakota may vote on transgender bathroom access in 2018