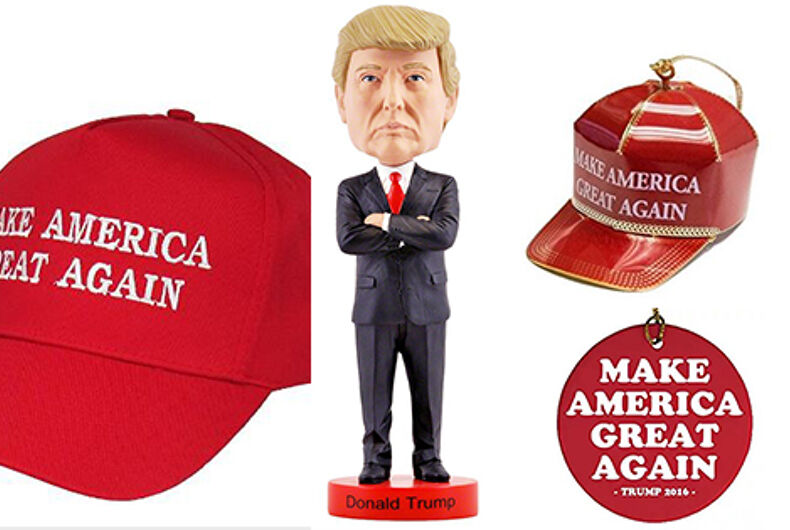 As we recently reported, president-elect Donald Trump is selling a $149 “Make America Great Again” ornament, which you can also find on Amazon for even more.

Reviewers worked their magic on the Trump ornament on Amazon, leaving comments like, “It called Mary a nasty woman, told Joseph to go back where he came from, built a wall around the manger, and then when you press it it sings ‘I’m Dreaming Of A Totally White Christmas.'”

Turns out they have been doing so on a number of Trump products, adding some humor to the 2016 presidential election, which many saw as a horror show of sorts.

Note that in many cases these are from third party suppliers and are not official Trump products. But let us start with reviews of an actual product released by Team Trump, the aforementioned “Make America Great” ornament, because there are plenty of great quotes there to go around.

“Question: Will this ornament keep all of it’s pre-holiday promises?
Answer: It’s already backing off jailing my Elf on a Shelf.”

“Question: How long will this ornament last?
Answer: Per the box insert, ‘Your Trump MAGA ornament is expected to last a minimum of 8 years and may have a lifetime guarantee if it’s allowed to operate with minimal resistance.’ However, preliminary testing in real-world scenarios indicates this item may have a melt-down and fall apart prior to January 20th 2017 if exposed to persistent ridicule.”

“Question: Can this item be used past Christmas?
Answer: It can only be used for the next 4 years, or until civilization ends, whichever comes first.”

“Question: What year is it referring to? When was America recently great?
Answer: Based on presidential approval ratings: last month.”

“Question: Is it rigged? It looks rigged.
Answer: This is a difficult question to answer. You see, it swears it’s rigged when it thought it wouldn’t be purchased. But once it WAS purchased it claims the purchase was fair and will gladly sit on your tree, even though it doesn’t understand how trees work. Now that the other ornament’s supporters say the purchase was rigged, this ornament calls them whiny liars.”

“Every autumn my family chooses a new ornament to go onto our holiday tree. This year it was between this ornament and another one that is less flashy, less gaudy, and just overall nicer. During our family meeting we overwhelmingly chose the other ornament but somehow we still ended up with this one. We’re not sure what happened.”

“Weird. It’s obviously one of the worst ornaments my family could have put on their tree, but they seem to love it. I don’t know why, but I feel uncomfortable just knowing about its existence.”

“Came with an entire crate of white hood ornaments. Great bargain! Downside: My tree is now on fire.”

“Not safe if you have cats in the house.”

“Question: Will it make my tree great again?
Answer: Refer to European history during the 1930s. This may answer your question.”

“As soon as I hung it on my tree, it started insulting all the other ornaments. When the other ornaments replied in kind, the Trump ornament started whining and crying, ‘NOT FAIR!!!’ Then it shattered without even being groped. I examined the broken pieces, and discovered they were covered by a very thin skin. The skin was apparently keeping the ornament together, and couldn’t take the insults it was dishing out. Would not recommend buying it — unless you want to see it self-destruct.”

“This ornament kept changing its mind. Right after the election it no longer said MAGA, but, ‘hahaha, I got you suckers!’

“Trump is very fragile and his feelings are hurt bigly when he sees people making fun of him or his very tender snowflake Pence. He is going to use his tiny little hands to send out a tweet at 4:15 am to complain about all these bad reviews.”

“Question: Does the hair bobble on top of the head?
Answer: No. We were sorely disappointed. They should change that. :) Seriously, it doesn’t. But it’s a fun idea!”

“This bobblehead looks exactly like the man, so much so that I actually feared it would deport me (American citizen of Mexican descent). Over all, it’s a good bobblehead. I would buy again if I needed to buy another one but I won’t.”

“Lettering on hat is messed up, looks more like “fake america great again.” Made in China, which doesn’t bother me, but at least make it correctly.”

“This hat perfectly symbolizes the Trump backer who shows support for our new president by not buying from his official store and supports american jobs by buying a cheaper knock-off product made in China.”

~ Matt Zig, in a review titled “The hat fits so wear it,” Five Stars

“Hat is made for small craniums! Tried to salvage my purchase by fitting it onto my chihuahua, She developed a rash and it made her severely stupid when she wore it. It also smells of dung! Not recommended! purchase at your own risk!”

“I don’t know why, but I wore this out to a bar, and several people started giving me s***.”

When you suddenly realize that perhaps you support the wrong candidate?:

“I wanted to like the hat, but then I realized ‘make America great again’ didn’t really apply to me. It never really was great if you were a person of color, queer, or a woman. It wasn’t great for the Native Americans, the African slaves, the Japanese in the internment camps. Its seems its only been “great” for a small portion of the population…I wish instead the hat said, ‘Make America Great!'”

“This onesie will open the way for discriminating one-on-one exchanges with other babies wearing blue, don’t you think? Personally I think it should have been white, but there are plan to release that version next…”

“Put this on my baby whenever I go to Starbucks to protest their godless holiday cups without an image of Baby Jesus on them.”

Alison Bechdel reprises beloved ‘Dykes to Watch Out For’ comic