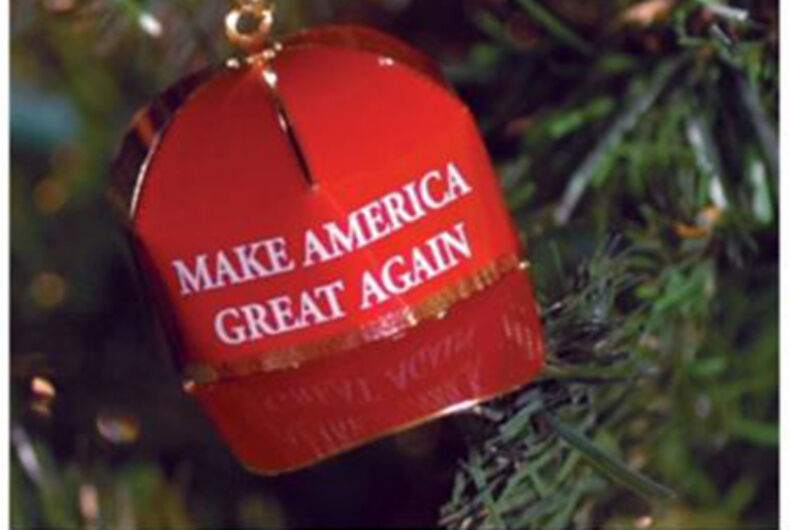 First up, Trump’s “Red Cap Collectible Ornament,” which can be yours for just $149. Reasonable!

As The Week reports, the same ornament is available on Amazon for the equally reasonable price of $250. Score.

Go check out the hilarious Amazon reviews of this ridiculous product, such as, “It tried to put my nativity figures into an internment camp. Would not buy again,” and, “It called Mary a nasty woman, told Joseph to go back where he came from, built a wall around the manger, and then when you press it it sings ‘I’m Dreaming Of A Totally White Christmas.'” Gold.

The website copy reads, “Get in the Christmas spirit with your very own Make America Great Again Red Cap Collectible Ornament. Made of brass and finished in 14 karat gold, this ornament is sure to make any tree stand out.”

Unfortunately, no mention whether or not it can be used as a tree topper. Sad!

The website is also still carrying the infamous “LGBTQ For Trump” shirt, which can be yours for $30 if you are one of the 14 percent of our community who supported the Republican nominee in spite of his pledge to sign anti-LGBTQ legislation and appoint far-right judges like the late Supreme Court Justice Antonin Scalia. Steal!

They are even “Proudly Made in USA” according to the web copy, which is at least a step up from Trump’s usual M.O.

The site is also having a Black Friday sale, because “president-elect Trump loves a great deal,” so sayeth Trump store manager Alex in an email blast.

Jeff Taylor contributed to this story.