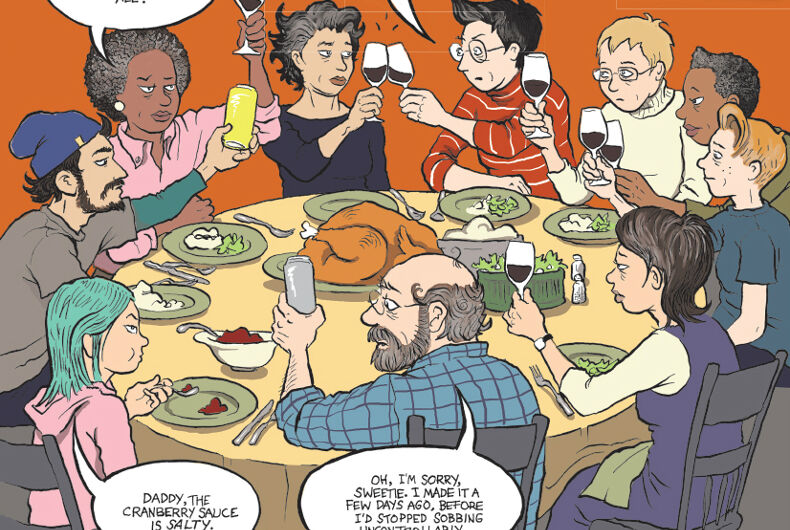 Alison Bechdel illustrated the cover of Seven Days in a recent issue featuring a reprisal of her comic "Dykes to Watch Out For."Photo: Alison Bechdel

It had been about eight years since iconic comic-creator Alison Bechdel penned one of her beloved “Dykes to Watch Out For” comics. But something about the Nov. 8 election opened the floodgates.

Over those eight years, Bechdel focused on other projects, including her award-winning graphic novel turned Tony award-winning musical Fun Home. In the midst of her transformation from an LGBTQ community icon to a household name, Bechdel also received the MacArthur “genius” award.

Still, fans yearned to reconnect with the “Dykes to Watch Out For” characters they’d come to know and love.

“Since I stopped drawing Dykes to Watch Out For at the tail end of the Bush administration, people have asked me many times if I thought about my characters, and if so, what they were up to. And I would have to be honest. No, I didn’t think about them, and I had no idea what they were doing,” Bechdel wrote last week in a blog post titled “Same as it ever was, only much worse. ”

Then the election happened. And she picked up her pen again.

“But last week,” Bechdel continued, “they all started flooding back.”

So Bechdel reached out to Vermont’s alternative weekly Seven Days, one of the papers where she had long published the comic.

“Like many Vermonters, Bechdel has been feeling distraught about the election results,” Seven Days cofounder Pamela Polston wrote. “While others have taken to the streets, Facebook and/or the liquor cabinet, she went back to the drawing board. And she emailed Seven Days to see if we’d be interested in publishing this strip.”

In addition to “Piéce de Résistance,” Bechdel also agreed to do a special comic for the newspaper’s cover.

“Working on it made me feel a little less awful,” Bechdel told Seven Days.

Life
Alison Bechdel, comic, Dykes to Watch Out For