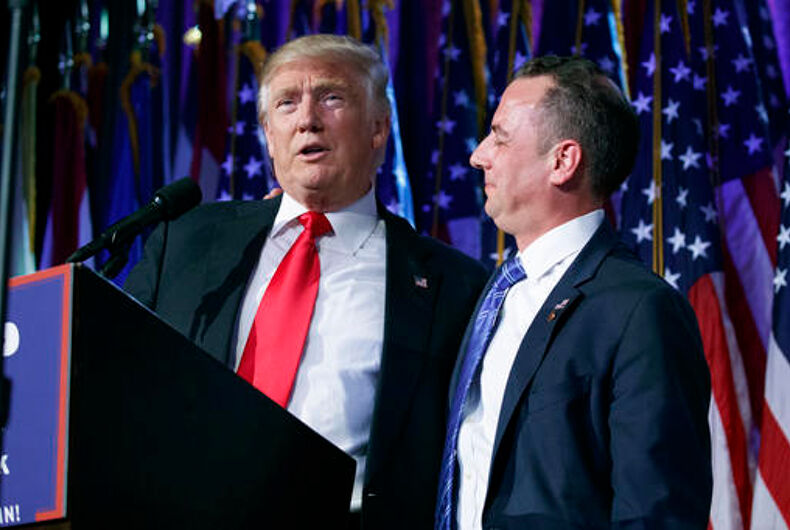 WASHINGTON (AP) — Donald Trump named Republican National Committee Chairman Reince Priebus his White House chief of staff, elevating one of his loyal GOP advisers with a deep expertise of the Washington establishment Trump has vowed to shake up.

Priebus, a close ally of House Speaker Paul Ryan, called the appointment “an honor” and predicted the billionaire “will be a great president for all Americans.”

Trump also named Stephen Bannon, his campaign CEO and executive on leave from conservative website Breitbart, to be the president-elect’s chief strategist and senior counsel.

With Vice President-elect Mike Pence as transition chief, the trio was expected to organize the incoming administration, according to a statement from the Trump camp.

There was much to steady. The appointments came after a day in which Trump’s tough-talking plan to rein in illegal immigration showed signs Sunday of cracking, with the president-elect backing off his vow to build a solid wall along the southern U.S. border and Ryan rejecting any “deportation force” targeting people living in the country illegally.

After Trump told CBS’ “60 Minutes” that his border wall might look more like a fence in spots, the combative billionaire took to Twitter to settle some scores.

During a four-hour spree, Trump savaged the New York Times and gloated about the GOP stalwarts lining up to congratulate him, bragging that staunch critics and GOP rivals John Kasich, Mitt Romney and Jeb Bush had sent attaboys. Former presidents George W. and George H.W. Bush also had sent their “best wishes on the win. Very nice!” The New York Times, Trump wrote to his 14 million followers, is “dishonest” and “highly inaccurate.”

As Trump revenge-tweeted, threats flew between power brokers, and protests across the country continued.

The president-elect retreated from the campaign promise that had inspired his supporters chant “Build the wall!” at Trump’s massive campaign rallies.

Would he accept a fence in some spots on the border? In an interview to be aired Sunday, Trump told “60 Minutes”: “For certain areas, I would, but certain areas, a wall is more appropriate. There could be some fencing.”

Excerpts of the interview were released in advance.

Trump also had vowed to immediately deport all 11 million people in the country illegally. But in the interview, he said he’s focusing first on ousting or incarcerating 2 million to 3 million “that are criminals and have criminal records, gang members, drug dealers.” Trump emphasized that securing the border is his very first immigration priority.

On that, Ryan agreed. But on CNN’s “State of the Union,” Ryan rejected the kind of “mass deportations” Trump had championed during the campaign.

“We are not planning on erecting a deportation force,” he said.

More tension emerged Sunday when Trump’s campaign manager, Kellyanne Conway, said Senate Democratic Leader Harry Reid should be careful in a “legal sense” about characterizing Trump as a sexual predator. When asked whether Trump was threatening to sue Reid, Conway said no.

But Adam Jentleson, Reid’s deputy chief of staff, said Trump is “hiding behind his Twitter account and sending his staff on TV to threaten his critics.”

Meanwhile, another Trump aide — Rudy Giuliani — suggested that the president-elect should have a “blind trust” to run his global empire to avoid potential conflicts of interest. But he said three of Trump’s adult children should probably have a hand in that trust.

“There’s no perfect way to do this,” he told CNN’s “State of the Union.” ”You have to have some confidence in the integrity of the president.”

Ryan, meanwhile, tried to calm the nation by suggesting that “people should just really put their minds at ease, we are pluralistic, we’re inclusive.” Acts of hate, he said, had nothing to do with the GOP.

“People who espouse those views, they’re not Republicans and we don’t want them in our party even if they’re thinking about it. And I’m confident Donald Trump feels the same way,” the Wisconsin Republican said on CNN’s “State of the Union.”

But at least on Sunday, Trump seemed to prefer to relish his election win.

At one point, he noted that Gov. Kasich, who refused to endorse him, “of the GREAT, GREAT, GREAT STATE OF Ohio called to congratulate me on the win.” Trump pointedly did not return the congratulations or offer thanks to Kasich. “The people of Ohio were incredible!” he tweeted.

He later attributed his win to his performance in the presidential debates against Democrat Hillary Clinton.

“The debates, especially the second and third, plus speeches and intensity of the large rallies, plus OUR GREAT SUPPORTERS, gave us the win!”