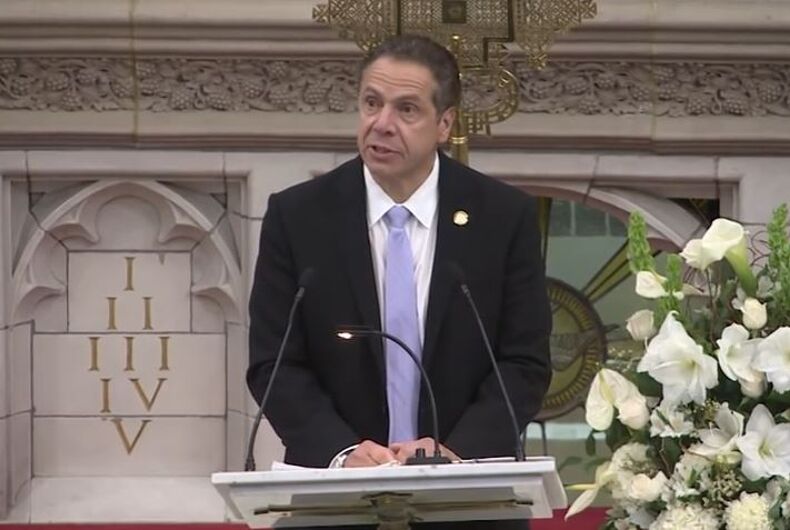 New York Gov. Andrew Cuomo delivered an inspiring speech on Sunday at the Abyssinian Baptist Church in Harlem calling on citizens to keep fighting for tolerance and justice.

“I come here today with a heavy heart,” Cuomo said. “The ugly political discourse of the election did not end on Election Day. In many ways it’s gotten worse, it’s deepened into a social crisis that challenges our very identity as a state, and as a nation, and as a people.”

He said that he is “soul sick for the America that I know and that I love.”

Cuomo noted that the Southern Poverty Law Center has logged hundreds of instances of abuse, intimidation, and harassment after the election “targeting blacks and people of color, as well as Muslims, immigrants, women, and members of the LGBTQ community.”

“The fact is this, if you sow fear you reap hysteria, if you sow divisiveness you reap anarchy, and we are seeing that today,” he added.

“The divisiveness must stop and New Yorkers will not be bystanders to injustice,” Cuomo said. “That is not the New York way. We will fight sexism and racism and bigotry wherever we see it.”

Cuomo also used the occasion to announce the formation of a new hate-crimes unit in the state police and legal assistance for immigrants targeted for deportation or discrimination.

Cuomo also said he hopes to expand New York’s human rights law, which bars discrimination based on age, race, sexual orientation, among others, to all students in New York, instead of just private-school students as is currently the case.

“The nation’s motto is ‘E Pluribus Unum,’ ‘Out of many, one,’ that is the American rule, period. And therefore, if you love this country and if you are an American, then you must act like one, and these acts of division are the exact opposite of what America stands for,” he said.

Watch Cuomo’s full remarks in the video below.