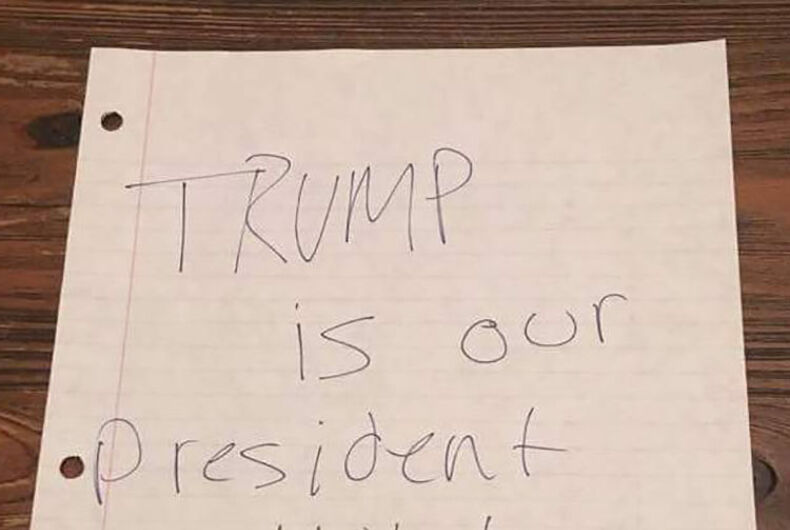 At 3 a.m. Thursday, Kyle Chester and Corey Hurley were awakened by a knock at the door of their West Virginia home. They opened it to find no one there; however, the mystery door knocker had left a note, that began, “Trump is our president now!”

Then came the scary part: a threat containing a homophobic slur, telling them they were not wanted as neighbors.

The out gay couple told the West Virginia Gazette Mail they dialed 911, and they shared their horror on Facebook. For some reason, the police didn’t pay them a visit, but their friends and family rallied to their defense.

“I appreciated the support,” Chester told the newspaper. “At the same time, it was chaotic and stressful.” Seeing patrol cars drive by without stopping to check on them was frustrating, he said.

“I didn’t think you had to explicitly say we want a police officer to come to my house right now.” The next day, as word of the incident grew on social and even international news media, Chester and Hurley received a call from police inviting them to file a report. But according to Chief Robbie Hilliard of the Clarksburg Police Department, the couple declined to file one.

Hilliard told the Gazette Mail he didn’t think the note was a hoax but that it could just be kids pulling a prank. So far, police have no suspects.

Also frustrating was ">Facebook’s removal of a picture showing the note, because it contained the word “faggot,” which one of their online friends suggested might have been reported as hate speech.

Last week’s election results were hard enough to take, Chester told Gay Star News: ”We waited up all night for the results and were devastated. But I’d come to terms with it and accepted it and figured we have to move forward and keep fighting the fight.” Now, after the threatening note, they said this wave of support they’ve received online has convinced them to not stop.

According to GNS, the couple plan to get married next year. But for now they say they are focused on activism and will be working with Fairness West Virginia to combat homophobia. “We had to find something positive about this,” Chester said.