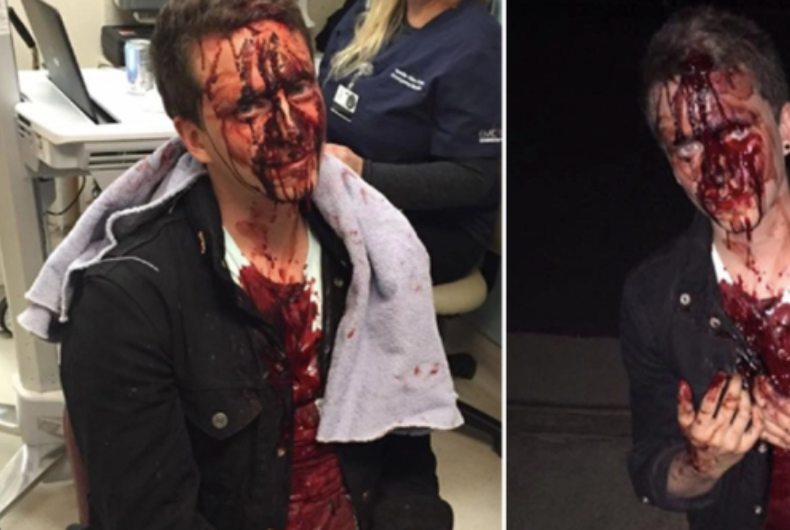 A Santa Monica man says he was the victim of a violent antigay attack shortly after Trump was elected on Tuesday night.

Chris Ball was hanging out at a bar in Santa Monica watching the election results when he started being heckled. As the evening wore on, tensions flared up between Clinton and Trump supporters.

“People started launching homophobic slurs at me from afar,” he tells Calgary Metro. “I mean, I kind of got into it, but I didn’t want to provoke them.”

Ball says people were yelling homophobic slurs and saying things like “We got a new president you fucking faggots.”

As he was leaving the bar that evening, a group of men approached him in the alley and smashed a bottle over his head. Ball fell backwards, hitting his head against the pavement and blacking out.

“When I came to, I remember waking up and wiping the blood from my eyes. I called some friends, they picked me up and I went right to the hospital,” he recalls.

His wounds required five staples to his head.

K.C. MacPherson, a friend of Ball, shared the horrific images of Chris bleeding on Facebook. In the post, he wrote: “This hatred, bigotry, and senseless violence all comes from the same part of America that voted in a demagogue who spits hatred as his rhetoric.”

Later, Chris posted his own update on Facebook: “Thank you everyone for the support and good vibes. Just wanted to say I’m alive and well. And still very gay.”