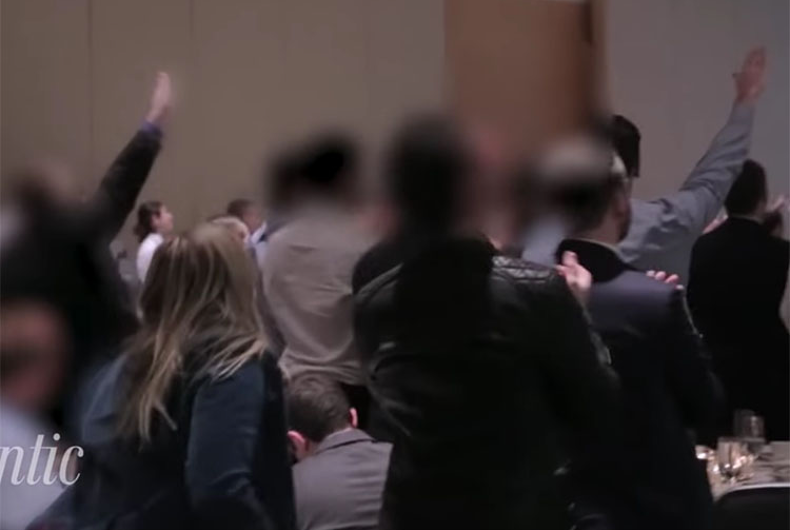 If you’re under the impression that comparing the so-called “alt-right” brand of anti-semitic, racist, homophobic, transphobic and misogynist politics to Nazi Germany is unfair and unwarranted, take a gander at a video from their victory rally Saturday.

The Atlantic magazine posted an edited version on YouTube, showing National Policy Institute president Richard Spencer raising his glass and declaring: “Hail Trump, hail our people, hail victory!” As cheers erupted from the men and a handful of women, apparently all white, some raised their left arm in salute, in a position that over the last 75 years has come to be known as “the Nazi salute.”

The word “hail” is of course also evocative of the words that traditionally accompanied the Nazi salute: “Heil Hitler.”

Earlier in his address, Spencer told the crowd to be proud: “America was until this past generation a white country designed for ourselves and our posterity,” he said. “It is our creation, it is our inheritance, and it belongs to us.”

If any doubt remains that Nazi Germany is of über importance to Spencer, who coined the term “alt-right” to describe — and disguise — his white supremacist movement, the Atlantic also noted he referred to the news media as “Lügenpresse.” Spencer told attendees it’s a term he borrowed from “the original German;” the word was used by Nazis to attack their critics in the press.

To find out more about this group, click here to read the Los Angeles Times’ guide. Click below to watch the video by the Atlantic, via YouTube.

Grab your popcorn for Donald Trump vs. the ‘crooked’ news media