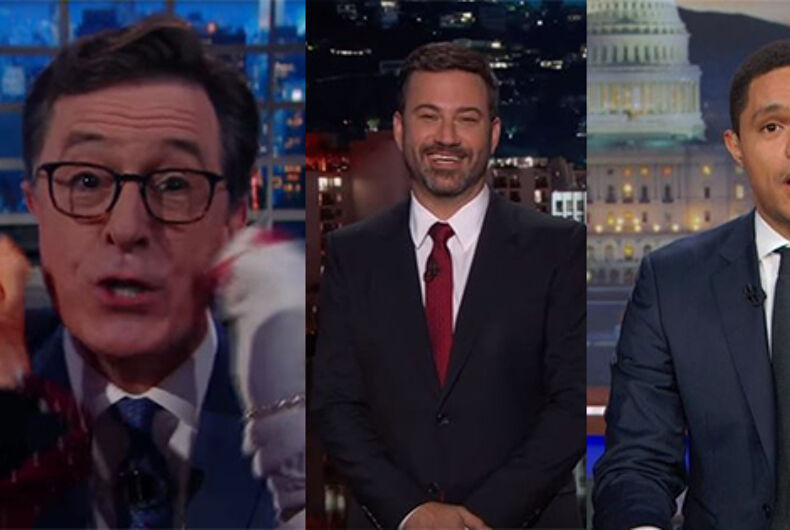 The 2016 election has been an unending gift for comedians, who are probably a bit sad that Donald Trump is most likely on his way out.

Or is he? As we learned at last night’s debate, he may not admit to a loss, meaning we might be stuck with him, and late night hosts blessed with him, indefinitely.

Whatever the outcome of this election the drama that may then unfold, late night is getting its shots in while the getting is good, most of which are landing squarely on Trump’s sniffling face.

“The Late Show with Stephen Colbert”

Stephen Colbert mocked Trump’s response to the question of whether he would concede if he loses.

“Are you saying you’re not prepared now to commit to that principle?” moderator Chris Wallace asked.

“What I’m saying is, I will tell you at the time. I’ll keep you in suspense,” Trump replied.

“Oh, suspense! Democracy’s gonna end with a cliffhanger,” Colbert joked. “I guess we’re all going to have to wait for November 9th to find out if we still have a country. If Donald Trump is in the mood for a peaceful transfer of power, or if he’s just gonna wipe his fat ass with the constitution.”

“And remember, this was Trump’s last chance to make an impression on undecided voters. People who haven’t heard about him in the past sixteen months. So, forest dwelling hermits and crab fisherman who had been swept out to sea,” Colbert added.

Colbert mocked the “Who is Putin’s puppet?” game Clinton and Trump played with each other, taking out two sock puppets who went from fighting to kissing, saying, “That was less juvenile than the debate.”

Jimmy Kimmel sent up Trump for his frequent interruptions, a feature throughout the debates, adding an extra one at the end for good measure.

Kimmel also sent Ken Bone, who became something of a celebrity after asking a question at the second debate, out to do a post-debate wrap-up. He asked Bone about the minor fall from grace he experienced when people looked into his Reddit history, before moving on to reactions to the debate. Still no word on who he’ll vote for, however.

“The Daily Show with Trevor Noah”

Trevor Noah had fun with Donald Trump’s choice of President Obama’s half-brother Malik, whom they called an “appetizer,” which Noah suggested was meant for another table. It is unclear why Trump would think Obama’s estranged brother would throw her.

He also poked fun at the puppet exchange, saying Trump thinks of all women as puppets.

“That’s why he’s always trying to stick his hand up them,” Noah said.