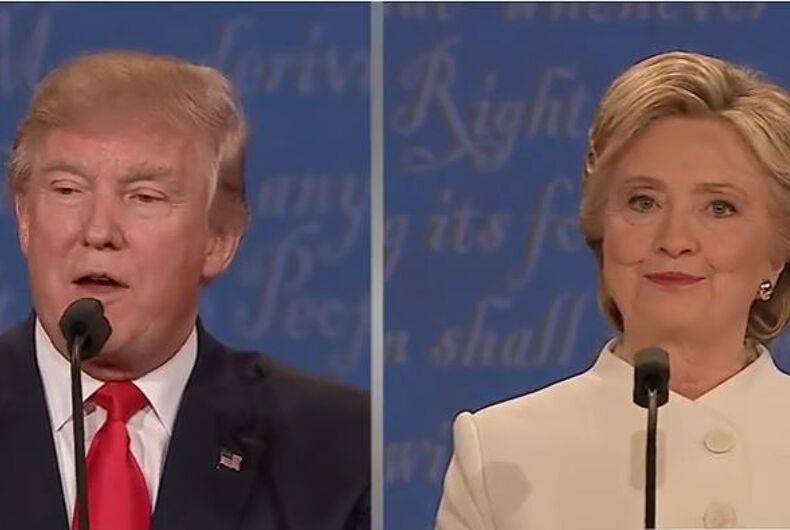 Donald Trump and Hillary Clinton face off in the third and final debate.Photo: Screenshot

Hillary Clinton and Donald Trump debated on Wednesday for the final time before the election, with Fox News’ Chris Wallace moderating.

LGBTQ rights, which had so far gotten little attention, came up early in the debate during a question about the Supreme Court. Trump voiced his support of appointing far-right justices like the late anti-LGBTQ Judge Scalia during the second debate.

“We need a Supreme Court that will stand up on behalf of women’s rights, on behalf of the rights of the LGBT community,” Clinton said.

Hillary Clinton: We need a Supreme Court that will "say no to Citizens United" #Debate https://t.co/U0Qg7uv85A https://t.co/A8DWrdRB4G

Trump criticized his opponent over the Clinton Foundation taking donations from countries with poor civil rights records when it comes to women and gay people, as he has done in the past, despite the fact that he also has financial ties to the region.

Since the last debate, a number of women have accused Trump of sexually assaulting them, prompted in part to come forward after Anderson Cooper asked him if the actions he was describing on the “Access Hollywood” tape was something he had actually done and he replied in the negative.

When Wallace asked about the accusations Trump suggested they were put up to it by the Clinton campaign, or else that they were merely seeking “fame.”

Trump claimed that no one has more respect for women than him, which drew some laughs from the audience. Later in the debate he would call Clinton “such a nasty woman.”

Clinton and Trump also took on abortion, with Trump promising to appoint pro-life justices and Clinton pledging her support for Roe v. Wade.

They also argued over who was Putin’s puppet.

“Look, Putin, from everything I see, has no respect for this person,” Trump said of Clinton.

“Well, that’s because he’d rather have a puppet as President of the United States,” Clinton shot back.

“It’s pretty clear that you won’t admit that the Russians have engaged in cyber attacks against the United States of America, that you encouraged espionage against our people, that you are willing to spout the Putin line, sign up for his wish list, break up NATO, do whatever he wants to do. And that you continue to get help from him.”

Hillary Clinton: Putin would prefer to have "a puppet" as president of the US #Debate https://t.co/U0Qg7uv85A https://t.co/IaQU5jpiNW

On immigration, Trump both accused Clinton of supporting a border wall – which she admitted she supported in some places, mixed with newer technologies – as well as open borders. Clinton clarified that the open borders she was advocating for was concerning energy trade.

Donald Trump: "We have some bad, bad people in this country that have to go out" #Debate https://t.co/U0Qg7uv85A https://t.co/EsDMsEV01d

In the most unprecedented moment of the night, Trump refused to say he would concede the election if he were to lose. He has been arguing at rallies that the election is rigged against him.

“I will look at it at the time,” Trump said, refusing to say he would admit defeat.

Trump on accepting the results of election: "I will look at it at the time" #Debate https://t.co/U0Qg7uv85A https://t.co/QhFcwgXDES

Election 2016 just might be the campaign that refuses to end. After all we’ve been through just to get here, that is scary indeed.

Watch the full debate below.