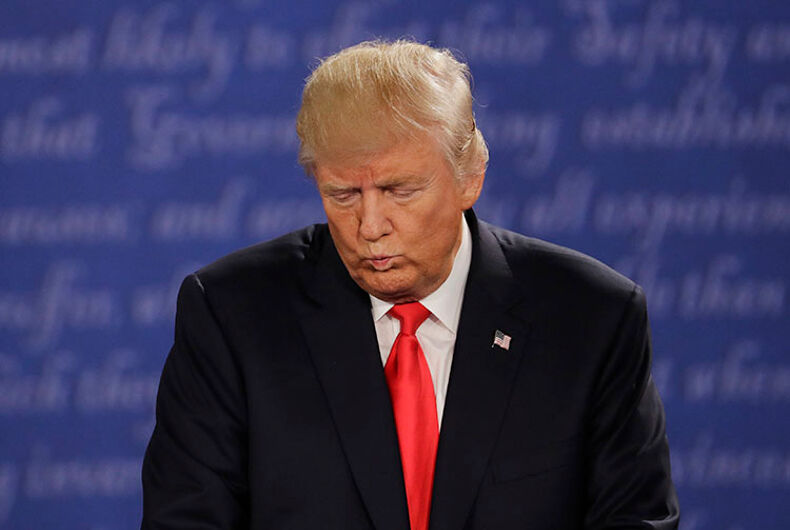 In a bitter debate filled with fire and insult, Hillary Clinton declared that Donald Trump’s vulgar comments about women reveal “exactly who he is” and prove his unsuitability to be president.

Firing back, he accused her of attacking women involved in Bill Clinton’s extramarital affairs and promised she would “be in jail” if he were president. Trump, who entered Sunday night’s debate desperate to steady his floundering campaign, unleashed a barrage of attacks and continually interrupted Clinton.

He repeatedly called her a “liar,” labeled her the “devil” and contended she had “tremendous hate in her heart.” When asked  if  they could be a president for all Americans, both said yes but Trump responded:“Absolutely. She calls our people deplorable and irredeemable,” he said.

“I would be a president for all our people… who would give strength to all, and bring jobs to people.”

This despite his pledge last month to sign the First Amendment Defense Act (FADA), if passed by congress. It was first introduced in the House on June 17, 2015 and would effectively legalize anti-LGBTQ discrimination across the board, including among employers, businesses, landlords and healthcare providers, as long as they claim to be motivated by a firmly held religious beliefs.

Once again, for the third time in this election, no one asked a question regarding LGBTQ Americans. But the Democratic nominee, for the first time, brought up the rights of the LGBTQ community. Clinton said when it comes to appointing justices to the U.S. Supreme Court and federal judges, she wants people “who understand the way the world really works, who have real-life experience.” She emphasized the need for justices to protect voting rights. “I want a Supreme Court that will stick with Roe v. Wade and a woman’s right to choose,” she said, “and I want a Supreme Court that will stick with marriage equality.”

Clinton and Trump could not have been further apart on the issue of the Supreme Court. Trump countered that the late Antonin Scalia, the court’s chief opponent to marriage equality, was his model for future appointments.

On another substantive matter, he acknowledged for the first time that he had paid no federal income taxes for many years. The debate was the culmination of a stunning stretch in the race for the White House, which began with the release of a new video in which Trump is heard bragging about how his fame allowed him to “do anything” to women.

Many Republicans rushed to revoke their support, with some calling for him to drop out of the race. Answering for his words for the first time, Trump denied that he had ever kissed and grabbed women without their consent. He said repeatedly that his words in 2005 were merely “locker room talk” and paled in comparison to what he called Bill Clinton’s abuse of women. “She should be ashamed of herself,” Trump declared.

Ahead of the debate, the businessman met with three women who accused the former president of sexual harassment and even rape, then invited them to sit in the debate hall. Bill Clinton never faced any criminal charges in relation to the allegations, and a lawsuit over an alleged rape was dismissed. He did settle a lawsuit with one of the women who claimed harassment.

On the debate stage, Clinton did not respond directly to Trump’s accusations about her husband or her own role, but was blistering in her condemnation of his predatory comments about women in the tape released Friday. “I think it’s clear to anyone who heard him that it represents exactly who he is,” she said, adding that she did not believe Trump had the “fitness to serve” as commander in chief.

The second debate was a town hall format, with several undecided voters sitting on stage with the candidates. The voters, all from the St. Louis area, were selected by Gallup.