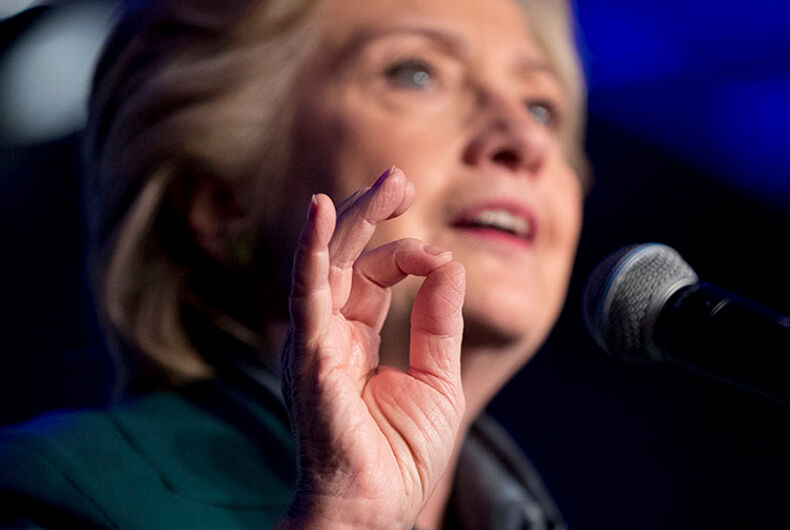 It's not clear exactly what Hillary Clinton is doing with her fingers but it could be she's sizing up Donald Trump's chances. Photo: AP Photo/Andrew Harnik

The second presidential debate between Donald Trump and Hillary Clinton begins in just a few minutes and a coin toss decided that the first female nominee of a major party will answer the first question. That question is certain to be about a video released Friday that revealed Trump in which he talked disparagingly about women, bragged of his ability to seduce them and that, as a celebrity, could “grab them by the pussy.”

Some conservatives have defended Trump but a wide swath of Republican supporters withdrew their endorsements following the video’s release, with some Trump supporters not only condemning his remarks from 2005 but calling on him to step aside for the good of the party.

NBC announced late Sunday night it is suspending Today show anchor Billy Bush who was caught on tape with Trump in the 2005 video making crude and sexist comments about women. At that time, the cousin of Jeb and former president George W. Bush was working at Access Hollywood.

Clinton and the GOP nominee will face questions from independent and undecided voters as well as two television personalities tonight at Washington University in St. Louis, Mo. The moderators are CNN’s Anderson Cooper and ABC’s Martha Raddatz.

Prior to the debate, Trump hosted a news conference with four women who have accused Bill Clinton of sexual assault or rape, reports Fox News. Paula Jones, Kathleen Willey and Juanita Broaddrick have each previously accused the former president of sexual assault. Some have also accused Hillary Clinton of intimidating them.

Joining them was Kathy Shelton, who said attorney Hillary Clinton defended the man who raped her when she was 12-year-old in 1975.

“Hillary put me through something that you would never put a 12 year old through,” Shelton said. “And she says she’s for women and children.”

You can watch the event posted by Trump to his Facebook page below.

LGBTQNation assistant editor Dawn Ennis will be live-tweeting the debate and posting updates on our Facebook page.

You can watch at this link starting at 9 p.m. EDT.

Trump slings mud, threatens, lies: ‘I would be a president for all our people’