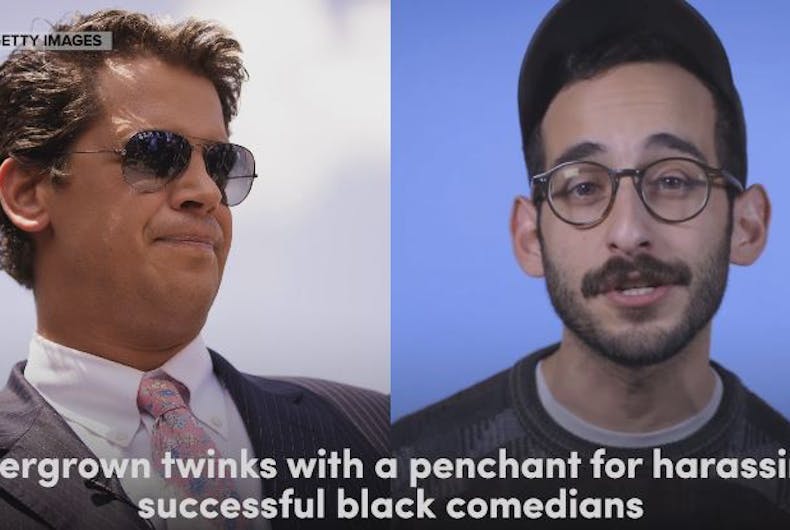 Milo Yiannopoulos gets called out for his racism in a new video from Mic.Photo: Screenshot, Mic

Racism is a problem in the gay community and you need look no further than the current presidential campaign, argues Gabe Gonzalez in a new video from Mic.

“Nothing more clearly illustrates that racism is alive and well in the gay community than this election cycle,” Gonzalez says. “Don’t believe me? Ask the gays. For Trump.”

“Like a rich daddy on Fire Island, the alt-right has penetrated the hearts of some impressionable young men,” he continues. “Overgrown twinks with a penchant for harassing successful black comedians [Milo Yiannopolous] or purchasing followers on Twitter [Lucian Wintrich] have become the fresh new face of the same, reliable racism of yesteryear.”

Gonzalez then cuts to a clip of Yiannopolous, in cop cosplay, denigrating the Black Lives Matter movement with his trademark nuance-free, misinformation rhetoric, too stupid to even reasonably label an argument.

The Log Cabin Republicans may have backed away from endorsing Donald Trump, but he does still have some supporters among the LGBTQ community.

While Trump likes to argue that Hillary Clinton takes money from countries that kill gay people, the Clinton campaign does not take money from other countries. The Clinton Foundation does, but it is illegal to ask for donations for an election from foreign countries and citizens. Although Trump has tried, even after being warned.

He then takes on the casual racism so often found on dating and hookup apps like Grindr and Scruff.

“Studies from Seattle, Washington to Sydney, Australia show that sexual racism is a real phenomenon that affects real people who feel unwanted or undesirable, before they’ve even had a chance to say hello,” Gonzalez continues.

“We can’t claim to be for equality if we show up for marriage and not black lives. We can’t march with pride if we can’t remember Marsha [P. Johnson] or Sylvia [Rivera]. It won’t ‘get better’ for queer youth of color until we identify and dismantle the ways we’ve normalized racism.”