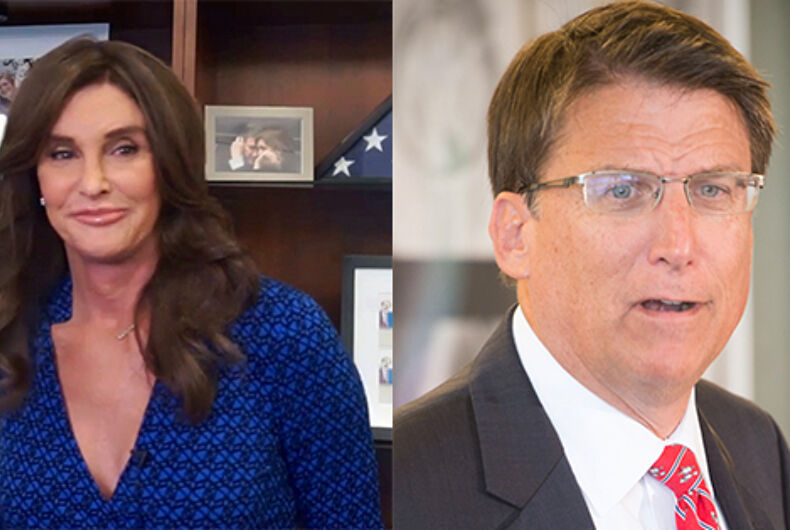 North Carolina Gov. Pat McCrory said in a debate with his opponent in the gubernatorial race, Attorney General Roy Cooper, on Tuesday night that Caitlyn Jenner should use men’s facilities if she visits a government owned building in North Carolina.

“Perhaps the most famous transgender person in the world is Caitlyn Jenner. What bathroom can she legally use in Charlotte?” moderator Chuck Todd asked.

According to HB2, the anti-LGBTQ bill that he signed, private businesses are allowed to set their own policies regarding the issue, so they would be able to deny Jenner and other transgender individuals the right to use the bathroom matching their gender identity.

Further, it requires trans people to use the bathrooms matching the gender on their birth certificates in government owned buildings. Jenner has changed hers, meaning sending her to the men’s bathroom would actually be in violation of HB2.

Cooper answered the question as well, saying, “This is the problem, Chuck. We shouldn’t be getting involved in these issues.”

He added that state government should have faith in local government, pointing out that there are “cities all over this country that have these types of ordinances.”

The Human Rights Campaign and Equality North Carolina released a joint statement after the McCrory, Cooper debate. They, along with Lambda Legal, the American Civil Liberties Union and ACLU of North Carolina, are suing Gov. McCrory over HB2.

“Tonight, we unfortunately heard more of the same from Governor McCrory: broken promises, sorry excuses and the same old hate-filled policies,” said Human Rights Campaign President Chad Griffin. “As Governor, Pat McCrory signed HB2 into law which has hurt North Carolinians and the economy. For voters the choice couldn’t be clearer. As Governor, Roy Cooper will stand up for fairness, equality and promote policies that bring jobs to North Carolina.”

“Tonight North Carolina saw two visions for North Carolina,” said Equality NC Executive Director Chris Sgro. “Pat McCrory tonight continued to blame others for the millions of dollars in economic loss we are suffering after he alone signed the most anti-LGBT bill in the entire nation. Roy Cooper offered a positive vision for our future and a commitment to common sense, fairness, and creating good paying jobs. Roy Cooper stands with all of us, which is exactly why he will be our next governor.”

This was the second gubernatorial debate. They will face off again on Oct. 18. The race has been close throughout, but Cooper has begun to open up a lead.

McCrory was also asked about his support of Donald Trump, for whom he has campaigned, making a joke out of telling people where the bathrooms are while HB2 continues to cost the state millions of dollars in lost revenue.

McCrory has condemned Trump’s comments, bragging about sexual assault, but still intends to vote for him, he said. He also added that he considered Trump a “role model” for “standing strong on certain issues that need to be said.”

Hillary Clinton has condemned HB2 while speaking in North Carolina on more than one occasion.

Watch Gov. McCrory makes the statement about Jenner below.

Watch the full debate below.