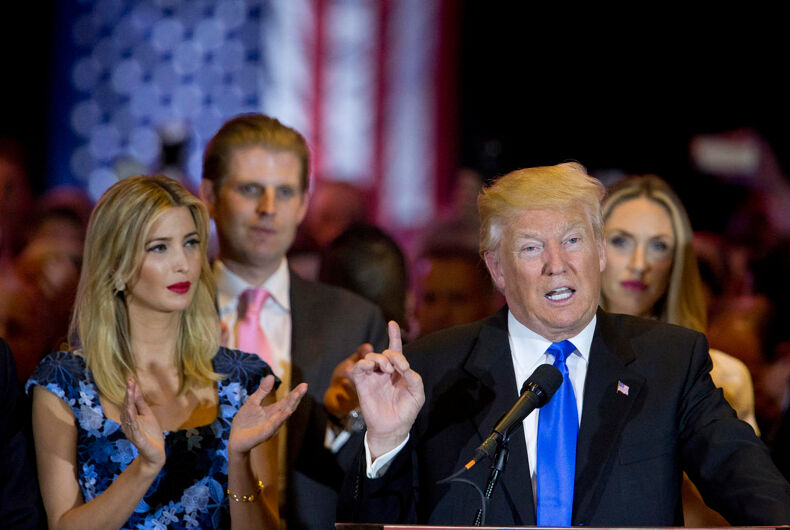 In this photo taken May 3, 2016, Ivanka Trump, daughter of Republican presidential candidate Donald Trump, listens at left as Trump speaks in New York. Ivanka Trump is defending her father Donald against charges that he mistreats women, insisting that the presumptive Republican presidential nominee is not a groper. (AP Photo/Mary Altaffer)Photo: AP

Donald Trump has held up daughter Ivanka as the paragon of beauty on numerous occasions, saying that perhaps if he weren’t her father they would be dating.

He is heard telling Howard Stern that it is okay to objectify her in the audio tapes released by CNN, which collected years of interviews the now presidential candidate gave for Stern’s radio show.

In those same tapes, Trump can also be heard bragging about not having gay thoughts during sex. It would seem the idea of anyone having such thoughts requires intense questioning. How could someone not be sexually attracted to Ivanka?

Jenn Hoffman, a contestant on season six of “The Apprentice,” has written an article for Esquire about what it was like to be a female on the show, and tells of Trump’s reaction to learning one of the other contestants was gay:

To Trump, there is no greater treasure than a beautiful woman, and he can’t imagine anyone not sharing his values. During our initial Spago dinner, our host had been shocked upon learning that Derek [Arteta] was gay. “So you’re not attracted to my daughter?” he asked disbelievingly. “So Ivanka does nothing for you?” (Fun fact: Ivanka was not at the dinner, but Melania was, sitting next to her husband. So even with his beautiful wife one seat away, he held up his daughter as the standard bearer of hotness to test for gayness in men. But I digress.)

When Arteta’s team won the prize of a visit to the Playboy mansion, she writes that Trump said it was being wasted on “a team of women and a gay guy,” and then, off camera but within earshot, that he had wanted to reward the other guys by giving them a shot at a hookup with a playmate.

Hoffman’s account of Trump’s behavior, as well as that of the show’s producers, will not be a shock to anyone who has been paying attention, and mirrors what we saw on the “Access Hollywood” tape. Still, it is a fascinating read and offers more insight into how the candidate behaved with women while at work. It also highlights why his attempts at positioning himself as a friend to the LGBTQ community have been awkward. Even when he spoke the acronym itself during his Republican National Convention speech it was with the tongue of a nonconversant.

In related news, a former gay employee of one of Trump’s golf clubs in New Jersey is suing for antigay harrassment and discrimination.