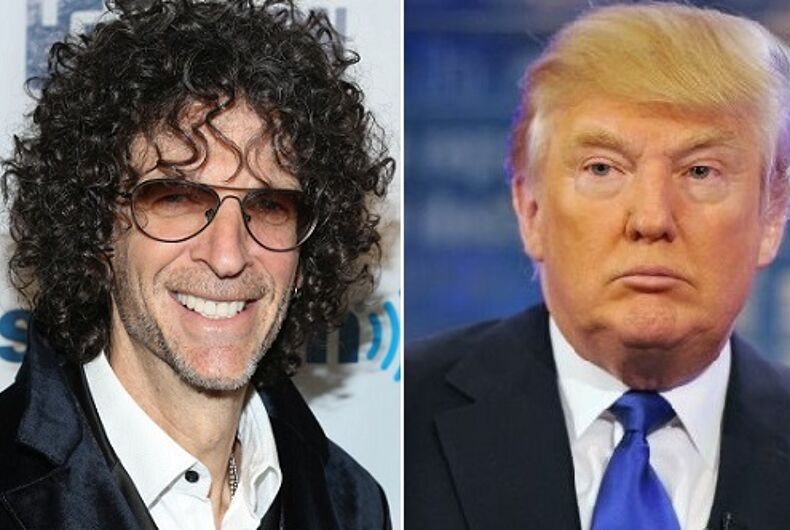 After Donald Trump’s debut as a sexual assaulter began with the Access Hollywood tape, the floodgates quickly opened. Among the worst comments to come to light were those that Trump made as a self-important publicity seeker on Howard Stern’s show. Like a lot of us, Trump was addicted to the program, both as a listener and as a guest. Trump appeared more than two dozen times over a two-decade period. In the course of his ramblings, he bestowed upon the public a trail that included his support for the Iraq War (which he keeps denying).

Trump probably thought that Stern was like Access Hollywood’s Billy Bush, an enabler in awe of Trump’s superiority. What he didn’t realize is that Stern was an exposer, showing Trump up as the buffoon he is.

Most people think of Stern as a shock jock, and that’s certainly how he started out. But Stern evolved into the most lethal type of interviewer: the one who lulls his subject into thinking it’s okay to say anything.

It’s not. As a result of Trump’s inability to see how Stern was playing him like a fiddle, we know have these gems:

Thanks to Stern, we also know Trump considered Miss Universe Alicia Machado “an eating machine,” was willing to set up daughter Ivanka up with Stern, called avoiding STDs his “personal Vietnam,” and boasted about walking into the dressing rooms of beauty contestants so he could see them unclothed.

Any one of these remarks would be bad enough. But taken together – particularly in the context of the Access Hollywood tape – they point a vivid picture of an egomaniac who sees women, even his daughter, as sex objects.

How did Stern get Trump to make such outrageous comments? By being willing to be outrageous himself. Stern’s show has always been willing to plumb the depths of bad taste. But just as Stern is willing to bring out the worst in himself, in a wonderfully self-deprecating manner, he’s got an undeniable talent in doing the same for his guests. Only Howard Stern – who, by the way has become quite a champion of LGBTQ equality – could get away with getting Trump to admit, sitting next to Ivanka, that he is in fact what he now denies he is.

“Donald, seriously. You know about sexual predators and things like that,” Stern says in yet another clip that has recently emerged. His co-host Robin Quivers fills in the blank: “You are one!” (Quivers deserves a lot of credit as Stern’s sidekick in his brilliant interviews.)

Stern knew just what he was doing: making Trump out to be the douchebag that he truly is. The pitiful part is that Trump had no idea what was happening. He didn’t get the joke. So much for the master negotiator.

In his ability to make his opponent look like a fool, Stern comes off as a much better politician than the candidate himself.