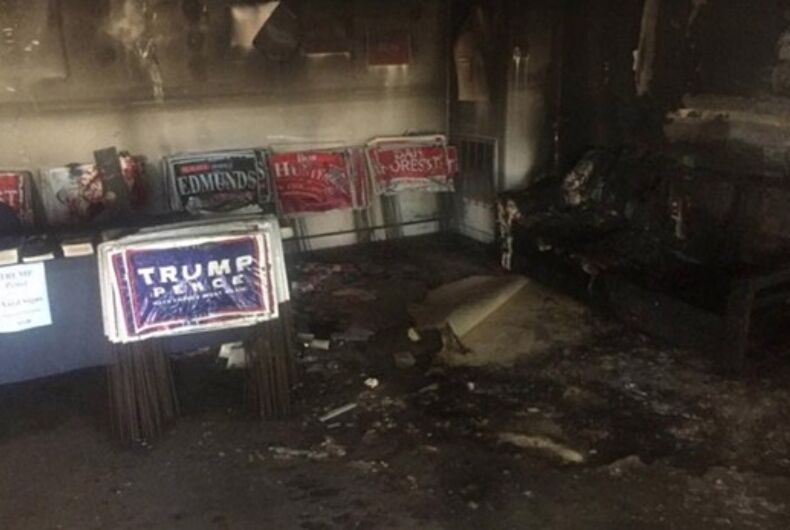 The aftermath from a firebomb tossed into a local North Carolina GOP office.Photo: Facebook

A local Republican Party office in North Carolina has been damaged by fire and someone spray-painted an anti-GOP slogan referring to “Nazi Republicans” on a nearby wall, authorities said Sunday.

A news release from the town of Hillsborough said someone threw a bottle filled with flammable liquid through the window of the Orange County Republican Party headquarters Saturday night. The substance ignited and damaged furniture and the interior before burning out.

The news release says an adjacent building was spray-painted with the words: “Nazi Republicans leave town or else.”

State GOP director Dallas Woodhouse says no one was injured, but a security alert is being sent to party offices around the state.

Presidential candidate Hillary Clinton responded via Twitter with a statement of regret and sympathy. Donald Trump, of course, blamed the Clinton campaign for the attack.

The attack on the Orange County HQ @NCGOP office is horrific and unacceptable. Very grateful that everyone is safe.

Thank you Mr. @realDonaldTrump. We will not be silenced nor suppressed by this evil act. We will pray for those who seek to harm us.

Animals representing Hillary Clinton and Dems in North Carolina just firebombed our office in Orange County, North Carolina- because we are winning!