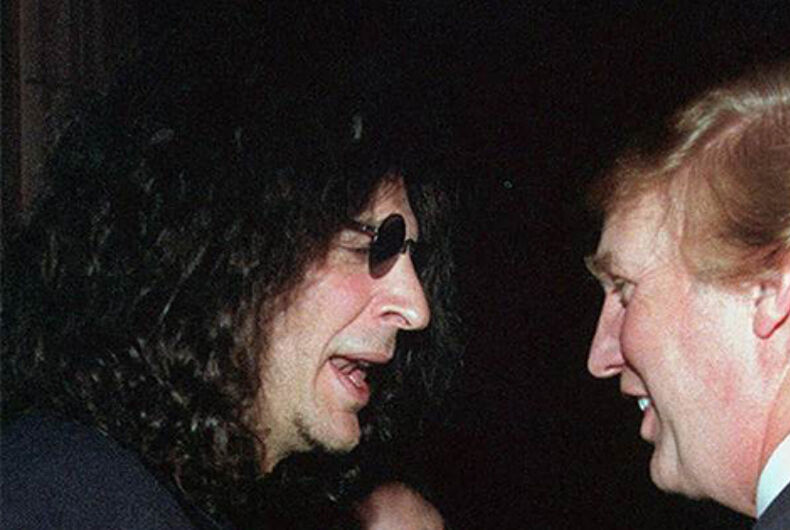 Donald Trump is already facing criticism and rebuke, both from inside and outside the Republican Party, over the release of a video from 2005 that shows him talking about sexually assaulting women on a hot mic.

Some Republicans are standing behind him and Trump says he refuses to leave the race in spite of mounting pressure.

Now CNN has unearthed audio from Trump’s appearances on “The Howard Stern Show” over a 23 year period, which contain more sexually lewd and objectifying conversations that are causing a stir.

The clip that has been getting the most headlines has Trump telling Stern that it is okay for Stern to call his daughter Ivanka a “piece of ass.”

Additionally, he speculates that Princess Diana would have slept with him, which he said just weeks after her death, and brags about getting to see beauty contestants changing backstage for the pageants he then owned.

Trump can also be heard in one clip boasting of his lack of sexual interest in men.

In the below audio clip, he and Stern start out by talking about the revelations surrounding Tiger Woods and his multiple affairs.

Trump makes sure to point what he apparently sees as an important takeaway from the story: Tiger Woods isn’t gay.

“But one thing we’ve learned about Tiger Woods, definitely, he is not gay,” Trump said after laughing at Stern describing a sexual position he heard Woods and one of his mistresses enjoyed performing. “Do you agree with that?”

Trump then recalls an interview Stern once conducted, which Trump calls “one of the great interviews of all time,” with a guy who recounted having “one or two events with a man” but did not identify as gay.

“You said, ‘Anybody who has had one or two events with a man is gay,'” Trump said.

“Absolutely. Absolutely, you know it and I know it,” Stern responded. “How many events have you had with a man?”

“Zero,” Trump answered. “Not even a thought.”

“In other words, with all that I’ve had, I’ve never had a thought,” Trump said. “There’s never been a big thought process, you know…Never even like a thought. In other words, let’s put it this way, during the event there’s never a thought of Jimmy or Ronald or any of that, no. No thoughts.”

He goes on to deny having a feud with Rosie O’Donnell, but follows that up by calling her a loser with no talent.

You can listen to the audio below, which be aware does contain strong language.

Listen to all of the audio via CNN here.