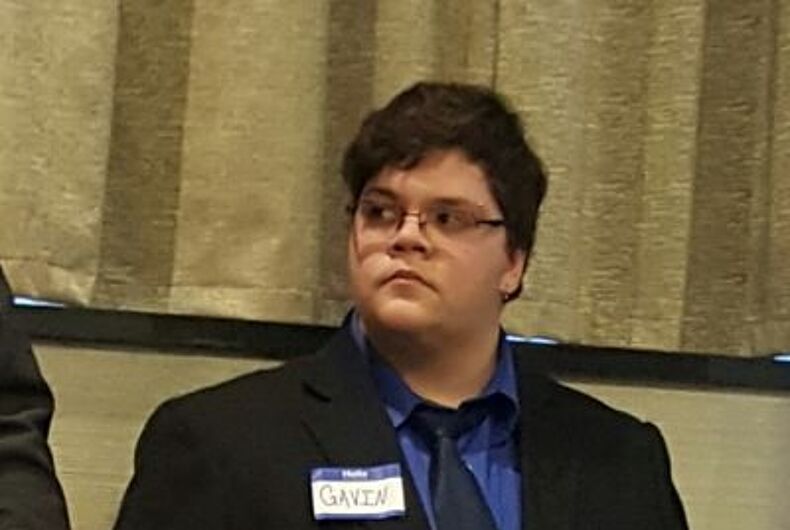 The U.S. Supreme Court Friday announced it will take up the case of Gavin Grimm, a transgender boy in Virginia who is suing his high school for the right to use the boys’ bathroom and locker room, which correspond to his male gender identity.

Grimm’s lawsuit against the Gloucester County School district’s bathroom policy specifically cites the 14th Amendment’s Equal Protection Clause and Title IX of the U.S. Education Amendments of 1972, which prohibits schools receiving federal funds from discriminating on the basis of sex.

The school district claims it is legally prohibiting him from using the boys’ restroom or locker room because they are not consistent with his “biological gender.” Schools, parents and legislatures across the country are watching this case, some in hopes the justices will find that rules requiring trans students to use bathrooms consistent with the gender on their certificates are necessary to safeguard privacy and traditional values.

Likewise, transgender students, their families and allies are looking to the court to settle once and for all the issue of civil rights as it applies to gender identity. Any ruling could have an enormous impact not only on Virginia and schools across the country but also in the case of North Carolina, where a law is being challenged in federal court mandating trans individuals use only bathrooms matching their sex listed on their birth certificates.

In April, the 4th U.S. Circuit Court of Appeals in Richmond ruled in Grimm’s favor, declaring he should be allowed to use the boys’ facilities. The judge cited guidance from the Obama Administration, specifically a letter from the Departments of Justice and Education, directing schools nationwide to treat transgender students the same as every other student, or risk punative action in the form of federal education funding.

In July the school board asked the court for an injunction prohibiting Grimm from using the boys’ lavatory and locker room until it had exhausted its appeals. When the federal court denied that injunction, the board took the case to the Supreme Court. The High Court took the unusual step of granting the injunction, meaning Grimm would once again be denied the right to use boys’ facilities when school resumed.

The board specifically asked the court to examine how the federal guidance applies in view of a ruling from 1997, Auer vs. Robbins, which was a case in which the late Justice Antonin Scalia wrote the opinion.

As The Washington Post reported, Gloucester argues the letter from DOJ and DOE “presents an extreme example of judicial deference to an administrative agency’s purported interpretation of its own regulation,” and claims it was developed by “a relatively low-level official in the Department of Education” without proper notice and comment.”

That 1997 precedent, Auer v. Robbins, gives deference to a federal agency’s interpretation of its own regulations. Conservative justices have previously declined to revisit that ruling.