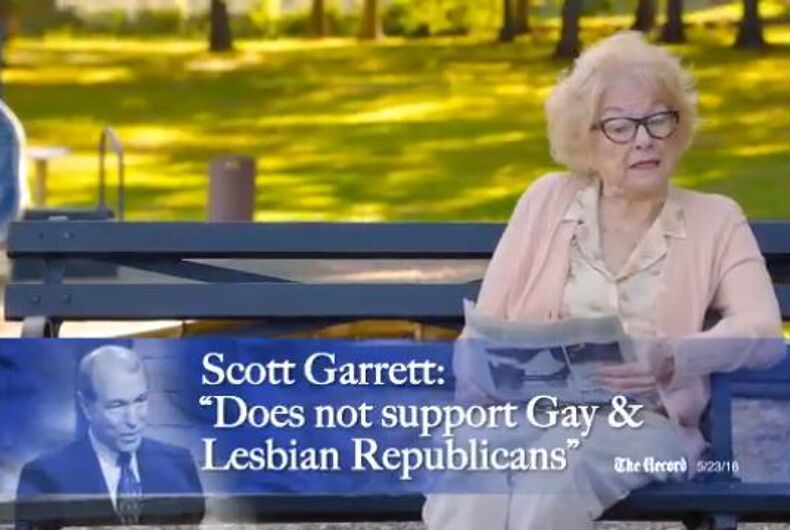 It begins with an older woman sitting on a park bench, her grandson running off to go play.

She tells the camera she just found out Garrett is a “Tea Party radical.”

“He voted against equal pay for women. Are you f—ing kidding me?” she asks. “Against healthcare for 9/11 first responders. Total [expletive].

“And Garrett said he wouldn’t support candidates for congress if they’re gay. Scott Garrett pulled the wool over our eyes. And I’m f—ing mad about it!”

The boy runs back into frame and she says, “Oh, sweetie, come on, we gotta go now.”

He became one of the most endangered GOP incumbents this cycle in part because of his refusal to pay dues to the House GOP campaign arm over its recruitment of gay candidates.

Those comments, leaked to Politico last year, damaged Garrett’s support from the financial services industry and deprived him of needed campaign cash.

Between that and redistricting that’s made the district slightly less favorable to Republicans, Garrett is on a much tougher path to reelection this year.

Garrett is also far behind on fundraising compared to his opponent. Gottheimer, a former Clinton White House speechwriter, has raised $4 million, compared with Garrett’s $1.9 million.

Can you blame a grandma for speaking her mind? Scott Garrett has pulled the wool over our eyes. Enough is enough. pic.twitter.com/GsjiNI733X