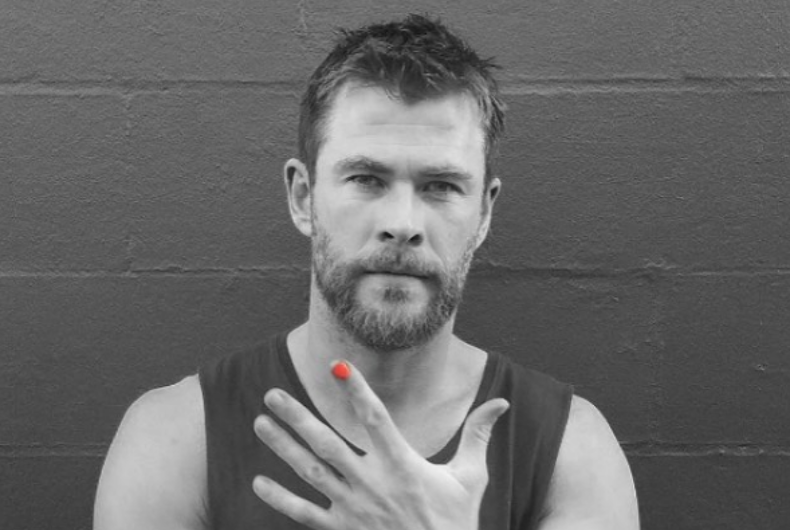 Actor Chris Hemsworth is among the male celebrities helping an Australian organization raise awareness about child abuse through its Polished Man campaign.Photo: Via Instagram

Male celebs are helping an Australian campaign raise awareness about child abuse by painting one of their five fingers, to represent the one in five children who experience physical or sexual abuse.

Brothers Chris and Liam Hemsworth are among the men enlisted in the Polished Man campaign by Y Generation Against Poverty (YGAP), a charity founded and run by Elliott Costello, whose father is the CEO of World Vision International, an evangelical children’s aid organization.

According to the campaign’s website, being a “polished man” means:

[Y]ou don’t turn your back on the vulnerable. You raise your voice – and nail – to say, ‘not on my watch.’ You embrace the smirks and know it doesn’t matter; there are worse things than being embarrassed by a little mani. Because nailing it isn’t about shouting the first round, or how much you lift. Nailing it is saying no to violence against children.’

YGAP says the funds raised — some $250,000 to date — go to programs that serve children who have experienced trauma, as well as to work being done by the Australian Childhood Foundation, Hagar International, the New York Centre for Children and World Vision.

That time Chris Hemsworth became a @ygap #PolishedMan. Nailed it.

What's better than one Hemsworth Polished Man? Two! The incredible @liamhemsworth has joined the @ygap #polishedman movement and taken a stand to end violence against children. Nailed it.

Actor Zac Efron also painted his nails in support after being nominated by Chris.

When @zacefron joined the @ygap #polishedman movement. Nailed it.

Former One Direction member Harry Styles got in on the action, too.

And then there’s surfer Kelley Slater.

The greatest of all time is a #PolishedMan. Nailed it.

See the full series on the Polished Man Instagram.