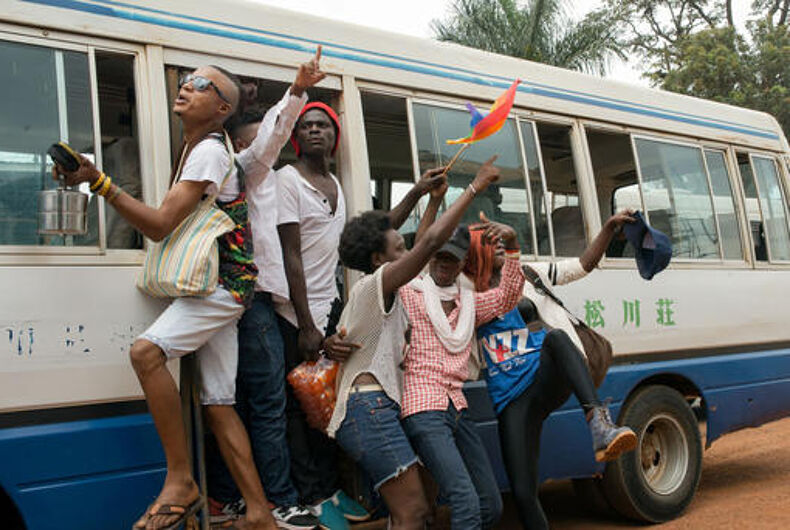 Members of Uganda's gay and transgender community yell "we want peace" after police forced them to leave the gay pride festival in Entebbe, Uganda, Saturday, Sept. 24, 2016. Ugandan police on Saturday prevented organizers from holding a gay pride parade on the orders of a government minister who said such an event is illegal. Photo: AP Photo/Katie G. Nelson

ENTEBBE, Uganda (AP) — Ugandan police on Saturday prevented organizers from holding a gay pride parade on the orders of a government minister who said such an event is illegal.

More than 100 LGBT people turned up for the event Saturday at a beach on Lake Victoria. Most were later ordered into minibuses and escorted by police to Kampala, apparently for questioning, the reason one young man jumped off a moving minibus and injured himself, Mugisha said.

“They are traumatized,” he said.

The LGBT people who had traveled in the mini-buses were later set free, he said.

Homosexuality is a crime in Uganda, as in many African countries. A colonial-era law proscribes homosexual sex acts “against the order of nature.” Gay rights leaders say the LGBT community faces discrimination, violence and extortion.

In August, Ugandan police briefly arrested about 20 people attending a gay pride event at a nightclub in Kampala. Following that raid, Mugisha and his colleagues decided to postpone the pride parade until September.

On Wednesday, Simon Lokodo, the Ugandan minister in charge of ethics and integrity, issued a strong statement condemning public activities of homosexuals and urged police to arrest them if they went ahead with the parade.

In 2009, a Ugandan lawmaker introduced a bill that prescribed the death penalty for some homosexual acts, saying he wanted to protect Ugandan children. The proposed bill prompted international condemnation. A less severe version of the bill passed by lawmakers was rejected by a Ugandan court as unconstitutional.