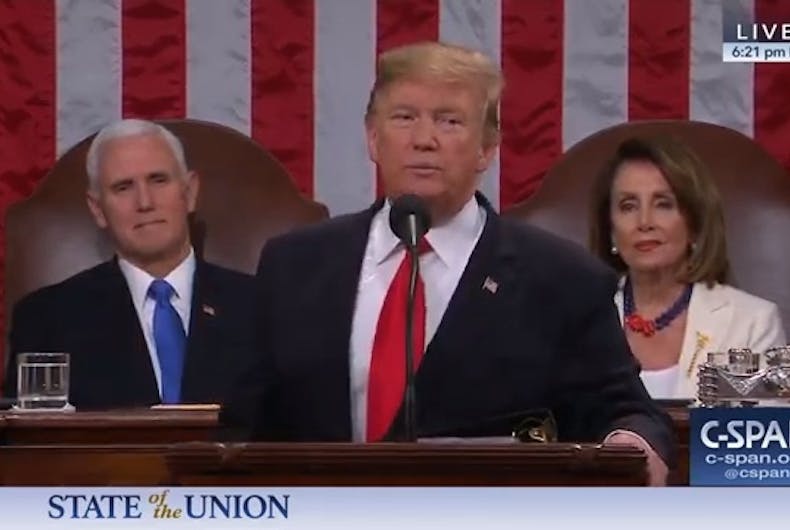 President Trump delivering the 2019 State of the Union AddressPhoto: Screenshot via CSPAN

The shorthand for the State of the Union address is SOTU, but when it’s delivered by Donald Trump, STFU may be more appropriate.

Trump finally got to deliver the speech before Congress after Nancy Pelosi stopped him from doing so during the government shutdown. Republicans predictably cheered the president as if they were at a bullfight, which was fitting given the amount of bulls–t that was thrown around.

Worth singling out during Trump’s address was the short, seemingly out-of-character promise to end HIV epidemic. Of course, it only amounted to a single, detail-free paragraph:

In recent years we have made remarkable progress in the fight against HIV and aids. Scientific breakthroughs have brought a once-distant dream within reach. My budget will ask Democrats and Republicans to make the needed commitment to eliminate the HIV epidemic in the United States within 10 years. We have made incredible strides. Incredible.

The irony of Trump making such a pledge is that he used to joke about avoiding STDs as his “personal Vietnam” and joked about forcing the late Princess Diana to undergo testing before he would have “nailed” her.

Setting that aside, the plan that Trump’s staffers have sketched out to the press actually sounds pretty decent: a focus on the 20 communities where infection rates are highest, greater access to HIV medications, including PrEP, and widespread promotion of condoms.

Experts agree that it would be possible to dramatically cut HIV transmission rates in the U.S. by 2030, as Trump promised. The plan being floated could do the job.

Too bad it will never happen.

There are two reasons why the Trump plan is probably nothing more than rhetoric.

One is that it flies in the face of Trump’s own track record on health care. This is the president that fired his HIV/AIDS commission without explanation and replaced it with a pale imitation. He stole money from AIDS programs to pay for his policy of separating migrant children from their parents. He also shut down HIV cure research.

Trump and his fellow Republicans have a track record of restricting access to care, not expanding it. In particular, Trump has done everything to cut back on Medicaid funding, which will need a lot more money to pay for the medications patients will need if HIV transmissions are to plummet.

At the same time, Trump has paved the way for making HIV a pre-existing condition that insurance companies can choose not to cover.

That’s policy. Then there’s Trump’s base, the religious right, as embodied by Vice President Mike Pence. Does anyone really believe that the religious right is going to allow the administration to reach out to men having sex with men or people using intravenous drugs? Or talk about safer sex?

The religious right has found a new life in refighting the 1990s culture war against LGBTQ people. That fuel for that war was the AIDS epidemic, which gave the right a chance to portray an entire community as both a social menace and a health threat.

There is zero reason to believe, in the current environment, the religious right has had any change of heart. If anything, it has doubled down on its calls to restrict LGBTQ people’s rights. Just two months ago, Mike Pence refused to even mention LGBTQ people during remarks about World AIDS Day. Why would anyone believe that the administration is suddenly serious about HIV?

As Pence shows, in the Trump administration pandering to the base will always triumph over sound policy. We could eliminate HIV transmissions in this country in ten years. But not as long as Trump is in the White House.