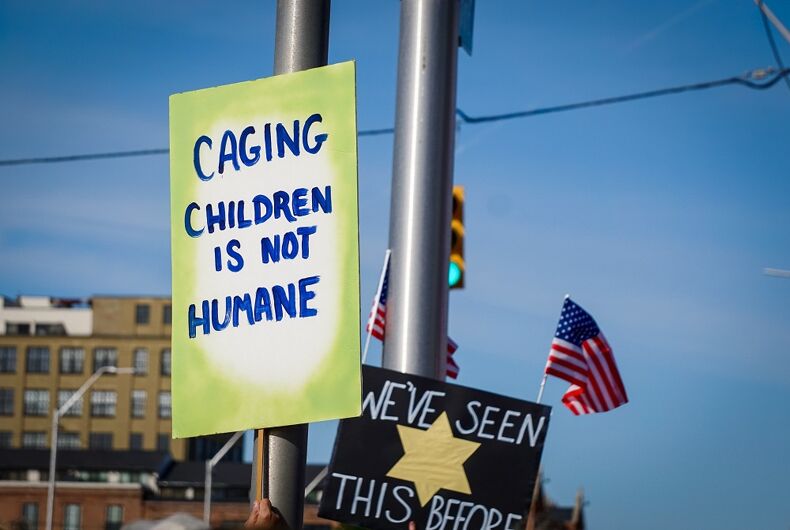 JUNE 14, 2018: A sign reads, "Caging children is not humane" at the protest to Keep Families Together in Detroit.Photo: Shutterstock

The Department of Health and Human Services is diverting hundreds of millions of dollars from other programs – including HIV/AIDS programs – to house a growing population of detained immigrant children.

In a letter to the Senate, HHS Secretary Alex Azar explained his plan to get $266 million for the Unaccompanied Alien Children (UAC) program.

$80 million came from other refugee assistance programs run by the HHS. But the rest is coming from non-immigration programs, including $5.7 million from the Ryan White HIV/AIDS Program, which provides funds for care and support for people living with HIV.

The National Cancer Institute will also lose $13.3 million. The National Institute of Health and the Centers for Disease Control also saw their budgets cut by millions.

The funding cuts are a symptom of the explosion of immigrant children being held by the federal government without their parents.

A 450-bed tent city in Texas that was scheduled to be closed in July will be kept open until the end of this year, with its capacity increased to 3800 children. These facilities cost an estimated $750 per child per day.

He said that we do not know “the reasons for need for additional money and how much of it is because [HHS has] more UACs coming across the border and how much is due to the Trump administration’s family separation policy?”

While the number of unaccompanied children found crossing the border has increased in 2018 but it’s still below 2014 levels. A large part of the increase has come from children spending more time in detention centers.

In March, it was reported that the Office of Refugee Resettlement (ORR) had a new policy requiring its director to personally sign off on the release of some children. Lawyers said that the children were being falsely accused of gang affiliation, and the Trump Administration has targeted the sponsors of unaccompanied minors for deportation, which deterred potential sponsors.

HHS Deputy Secretary Eric Hargan said that the reallocation of funds is within Secretary Azar’s authority.

“These transfers are only a temporary solution to the sad consequence of a broken immigration system,” he said.

HHS told The Hill that the only funds that have already been transferred are $17 million in unspent funds from the Ryan White HIV/AIDS Program.