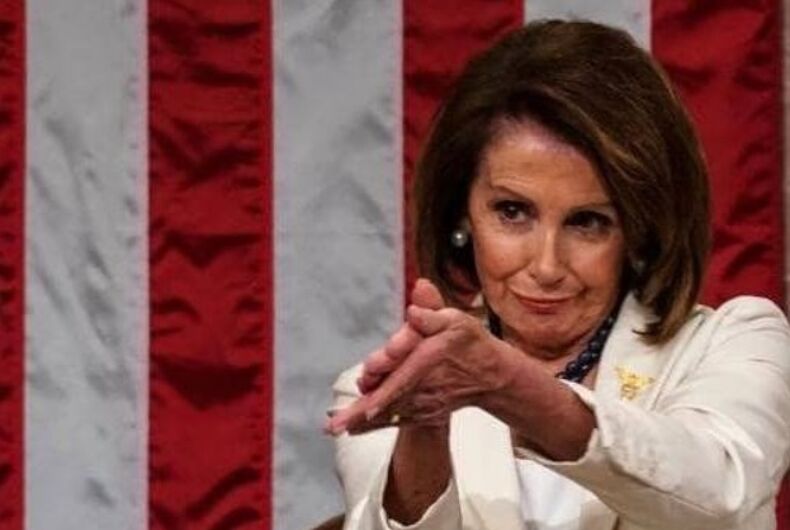 Speaker Nancy Pelosi stole the show last night at the State of the Union (SOTU) address with a literal clapback.

Donald Trump spoke at the Capitol for an hour and twenty minutes, and Democrats applauded and withheld applause to highlight their differences with the administration.

Then Trump said something that perhaps everyone vaguely agrees with: “We must reject the politics of revenge, resistance, and retribution, and embrace the boundless potential of cooperation, compromise, and the common good.”

Pelosi applauded that line, but her applause expressed a lot.

This Nancy Pelosi: EVERYTHING. 🙌🏼😂 pic.twitter.com/FlnybjYDm1

Related: Nancy Pelosi just gave Trump hell in the Oval Office on live TV & the internet is living for it

Patton Oswalt summed up why the clap was glorious.

Congrats to @SpeakerPelosi for inventing the “fuck you” clap. #sotu pic.twitter.com/eueoUf9IBT

After years of Trump bullying people on social media, calling people he disagrees with enemies, and presiding over the longest government shutdown in U.S. history because he was unwilling to compromise, a lot of people loved seeing an acknowledgement that Trump wasn’t even living up to that platitude.

Nancy Pelosi was trolling Trump the entire night. This is how a mother claps for a toddler, every mother knows this clap. "Good boy, you did it! You are mama's smart little guy!"

The "you're full of bs" clap we all needed. Thank you, @SpeakerPelosi #SOTU19 pic.twitter.com/KeRUGZUBZe