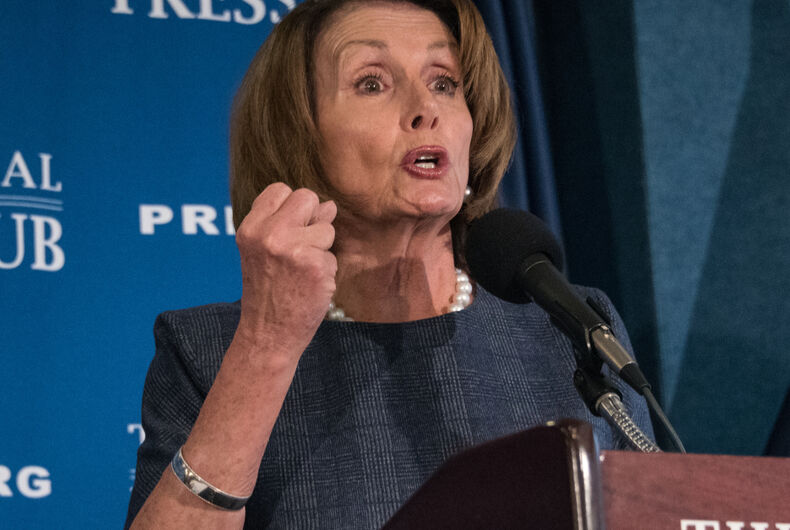 Democratic leaders Nancy Pelosi and Chuck Schumer met with President Trump today in the Oval Office and the meeting quickly devolved into a yelling match between Pelosi and Trump.

Trump invited the press into the room to watch the action despite not warning Pelosi or Schumer that they would be present. And after he launched into a tirade about funding for his wall, Pelosi repeatedly asked him not to discuss funding issues in front of the media.

But Trump wouldn’t stop insisting he could get funding for the wall passed through the House – despite Democrats overwhelming majority in the upcoming Congress. Finally, her patience worn thin, Pelosi returned fire.

The result was glorious and progressives across the nation stopped what they were doing, sniffed the air, turned on their Twitter machines, and started celebrating an early Christmas.

During his meeting with Nancy Pelosi and Chuck Schumer, Pres. Trump says "we may not have an agreement today, we probably won't" on border wall funding, but "we have an agreement on other things that are really good." https://t.co/ENqvpgOHXg pic.twitter.com/miQxUApphY

“I would win a vote easily in the House,” on the wall, Trump says.

Pelosi: “You would not win.”

Trump and Pelosi sparred in the Oval Office over votes in Congress for border wall funding pic.twitter.com/xcOVoDDQ1m

This fight between Trump and Nancy Pelosi on live TV over funding for a border wall is pretty incredible.

Nancy Pelosi just stood up to Trump more than any Republican ever has.

In the White House.

We need more of this. 🇺🇸

This is so hard to watch

Two serious politicians debating with a known criminal whether the U.S. should bankrupt itself building a giant wall, an 1118 A.D. solution to a 2018 A.D. situation https://t.co/eLN5l1dgIc