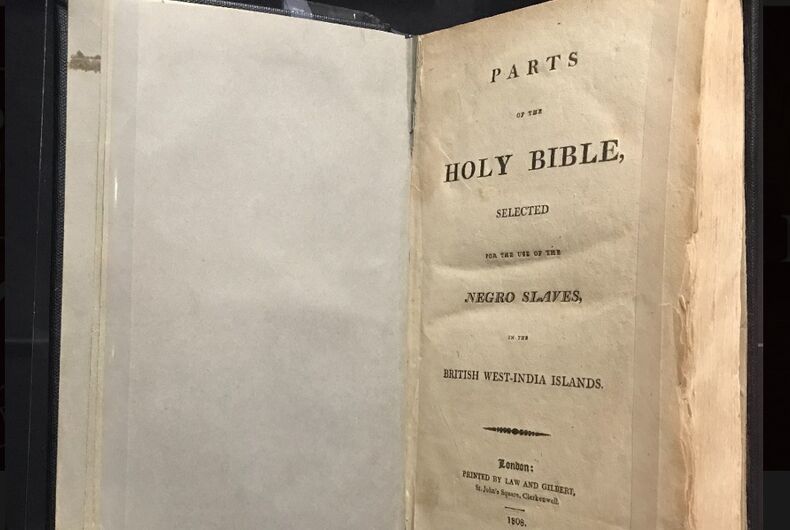 Photo: Twitter/Museum of the Bible

A new museum exhibit highlights how the Bible has been used as a political document with a copy that omits passages that would have worried slaveowners.

The Museum of the Bible in Washington, D.C., is displaying a copy of what has been called the “Slave Bible,” a Bible that has all the incendiary parts about freedom and revolution cut out, making the book a tool for encouraging submission among the slaves who missionaries were trying to convert.

Parts of the Holy Bible, Selected For the Use of the Negro Slaves, in the British West-India Islands is missing the entire story of the Jews in Egypt and their exodus. According to The Root, Moses doesn’t even appear until he’s old.

“You’ll see a jump from Genesis 45, and they’ve cut out all the material to Exodus 19,” says Anthony Schmidt, an associate curator at the museum. “What they’ve cut out is the story of the Israelites captivity in Egypt and their eventual liberation and journey to the promised land.”

Related: The Bible might have originally been OK with gay sex

Schmidt said that about 90% of the Old Testament and 50% of the New Testament were cut out of the Slave Bible, and he pointed to some other passages that were cut.

For example, Galatians 3:28, which promotes racial equality, didn’t make it into the Slave Bible:

One passage that stayed in, though, was Ephesians 6:5:

Servants, be obedient to them that are your masters according to the flesh, with fear and trembling, in singleness of your heart, as unto Christ.

“This can be seen as an attempt to appease the planter class saying, ‘Look, we’re coming here. We want to help uplift materially these Africans here but we’re not going to be teaching them anything that could incite rebellion.'” Schmidt told NPR.

Today, Christians can be selective about the parts of the Bible they believe are important. Conservatives often stress the parts about homosexuality, while ignoring the parts about love and treating immigrants with compassion.

But in an age of public libraries, mass literacy, and the internet, they don’t actually cut out the parts they don’t like.

“One of the points of the exhibit is that time and place really shape how people encounter the Bible,” Schmidt says. “What I mean by that is people don’t look at the Bible or approach the Bible or read the Bible in a vacuum. They’re shaped by their social and economic context.”

The book was printed by the Missionary Society for the Conversion of Negro Slaves and was intended to be used in the British West Indies, what is today Jamaica, Barbados, and Antigua.

The copy on display at the Museum of the Bible is on loan from Fisk University in Tennessee, and it’s the only copy in the U.S. There are several other copies in the U.K.

Artifact of the Day: Parts of the Holy Bible, Selected for the Use of the Negro Slaves (AKA "Slave Bible") 1808. Though called "Holy," it is deeply manipulative. Based on the KJV, it omits all entries that express themes of freedom. #BlackHistoryMonth pic.twitter.com/UxrkwgT0PP

If you are editing things out of the Bible, it should occur to you that you might not be doing God’s work.