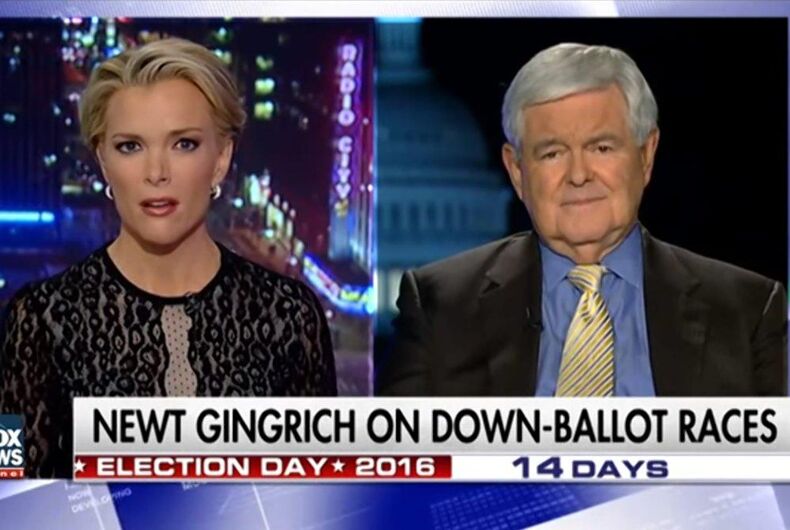 Newt Gingrich would really prefer it if the media would please stop covering the sexual assault allegations against Donald Trump.

A number of women have come forward with claims of sexual assault against Trump after the “Access Hollywood” tape emerged, prompting Anderson Cooper to ask him in the second debate if he had ever engaged in the conduct he described in that footage. He denied ever having done so, prompting women to go public with claims to the contrary.

Gingrich trotted out a new line of attack against the media while appearing on Megyn Kelly’s “The Kelly File,” claiming that the host was “fascinated with sex and not public policy and you don’t care about public policy.”

“Me, really?” Kelly responded with confusion.

“Now that’s what I get out of watching you tonight,” Gingrich said.

“You know what, Mr. Speaker, I’m not fascinated by sex. But I am fascinated by the protection of women and understanding what we’re getting in the Oval Office,” Kelly shot back. “And I think the American voters would like to know.”

“And therefore we’re going to send Bill Clinton back to the East Wing, because after all, you are worried about sexual predators,” Gingrich said, implying covering Trump’s accusers is nothing more than an attempt to get Hillary Clinton elected.

Kelly wasn’t having it.

“Listen, it’s not about me, it’s about the women and men of America,” she said, pointing out that the polls show many Americans believe the women making accusations against Trump and that they shouldn’t be dismissed.

Gingrich then nosedived into a double down of his spin, demanding Kelly say that Bill Clinton is a sexual predator. Kelly explained that she has covered the allegations against Clinton in the past as well.

Kelly had said earlier in the interview that if Trump is a sexual predator that is a big news story, adding that she wasn’t taking a position on it but pointed out that that is what is being claimed.

Kelly once again explained that they have covered the accusations, while Gingrich smirked and pivoted his head side to side like a dog asked if he’d like a treat, and then continued to tell her she should say the words he wants to put in her mouth.

Kelly then pointed out that Bill Clinton wasn’t running for president and that voters were less concerned with the “deeds of Hillary Clinton’s husband than they are in the deeds of the man who asks us to make him president, Donald Trump.”

Kelly then ended the interview by telling Gingrich to work on his anger issues. Gingrich told her to do the same.

At the start of the interview Gingrich denied the accuracy of the polls, which show Trump losing in most key battleground states and with an unlikely prospect of winning the White House.

He said he believes Trump might win in Pennsylvania, which Kelly pointed out all the polls show him losing.

“We have two alternative universes right now,” Gingrich said. Indeed we do.

Best one yet: Lady Gaga kills it on James Corden’s carpool karaoke